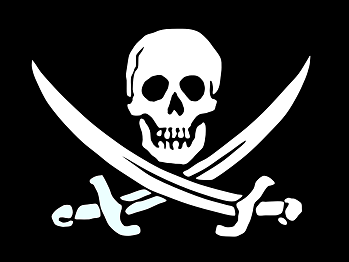 Erich: Hans, have you noticed that our caps actually have little pictures of skulls on them? [...]
Hans: Well — maybe they're the skulls of our enemies!
Erich: Maybe. But is that how it comes across? I mean, it doesn't say next to the skull, y'know, "Yeah, we killed him, but trust us, this guy was horrid"!
Hans: Well, no, but—
Erich: I mean, what do skulls make you think of? Death. Cannibals. Beheading. Erm... pirates...
Hans: [brightening] Pirates are fun!
Erich: I didn't say we weren't fun, but, fun or not, pirates are still the baddies. I just can't think of anything good about a skull!
— Two Nazis starts to realize their role in the narrative, That Mitchell and Webb Look
Advertisement:

When you find a complete skeleton, it's a strong sign that its former owner is Deader Than Dead. Thus it's only natural that skeletons symbolize death, evil, and, well, scary things. This is particularly true for skulls: a human skull is made particularly off-putting by the facial structures still visible on it, leading to the instinctive attempts of the human mind to locate faces and thus people assigning expressions and emotions to the bare bone — the skull's trademark grin from beyond the grave. In this way, the visage of a human skull almost becomes the face of death itself. So, to symbolize a character's darker side or to give them that "Dead Serious" (pun intended) edge, it's only natural to use imagery associated with bones, skeletons, or skulls.

For obvious reasons, this kind of imagery is very commonly used by necromancers, The Grim Reaper, gods of death and the underworld and other "deathly" folks, and is likewise associated with places and events that have to do with death and the dead. More generally, skull and skeletal symbols commonly accompany evil, villainous or at least dangerous places and characters even if they have nothing in particular to do with death or necromancy.

This trope can take many forms. While some characters may use real bones, photographs, or detailed drawings of bones to construct their motif, something as subtle as a pattern on a T-shirt or a piece of jewelry that vaguely resembles a skull can be just as effective. Sometimes the writer chooses a skeletal appearance for a character to make them scarier, and sometimes the character will use skeletal imagery deliberately, perhaps to frighten enemies, or to make themselves seem edgier.

For "bad" characters in particular, a Big Bad or a member of a Quirky Miniboss Squad will use a Skeleton Motif for their own appearance or for that of their mooks. This is often done deliberately by a Card-Carrying Villain or a Harmless Villain looking for respect. Not surprisingly, this is especially common in franchises with Black-and-White Morality that make use of Dark Is Evil, or when the villains are Putting on the Reich. Whether it's a barbarian warlord, a Supervillain, an Evil Overlord or The Emperor who decorates his home with skulls, or a Monster-Shaped Mountain inexplicably shaped like a human cranium, the message is always the same — this is someone or someplace you will want to avoid.

On the other hand, many Antiheroes also use a Skeleton Motif as part of a Dark Is Not Evil or Good Is Not Nice persona. Characters alluding to the Day of The Dead and La Calavera Catrina also use a skeleton or calaca sugar skull motif.

Typically, because Beauty Equals Goodness and Evil Is Cool, heroes with a Skeleton Motif usually have a normal or mostly normal face underneath their skeleton mask, while that's less true of villains.

Note: please put examples that fit one of the tropes above on the appropriate page rather than here.