Older Than They Think 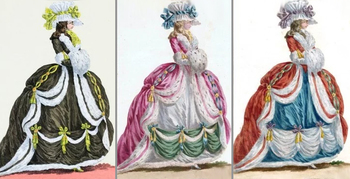 Think the Palette Swap started with video games? A dressmaker for this old fashion journal used it to sell winter dresses to fit ladies' tastes.
"I, of course, used a time machine to 'get the idea' of Unseen University from Hogwarts; I don't know what Paul [Kidby, the illustrator] used in this case. Obviously he must have used something."
— Terry Pratchett, on the similarities between Discworld and Harry Potter
Advertisement:

Simply defined, a fan thinks a trope, plot or line was invented by a show they watch, when in truth its origins lie farther back in history.

Tropes tend to be much older than they appear, even if they aren't one of The Oldest Ones in the Book, so it's increasingly likely that a viewer of a specific program won't be familiar with the original source of whatever is on display.

This can also be inverted by fans, who see a modern adaptation of some older classic they're unfamiliar with, and incorrectly assume some newly introduced trope was part of the original work. The ultimate expression of this is the Unbuilt Trope — someone did it previously, examined it, deconstructed it, zig-zagged it, all spectacularly, finished the story's run, but is now remembered mostly nostalgically, not for its trope.

See also the more extreme Fleeting Demographic Rule. Compare with classical music Covered Up, Name's the Same, Pop-Cultural Osmosis, "Seinfeld" Is Unfunny, Revival by Commercialization, Sequel Displacement, and Parody Displacement. Franchise Original Sin is this trope applied to a fan complaint. Somewhat related to Adaptation Displacement. Can be the result of Small Reference Pools making fans miss older works. Contrast with Newer Than They Think, which goes in the other direction. Do not confuse with Older Than They Look. There will be a short quiz at the end of class.

For examples of people referencing this in fiction, see It's Been Done. See also Fan Myopia for the same effect when it's over work knowledge rather than time knowledge.

Alternative Title(s): Older Than You Think