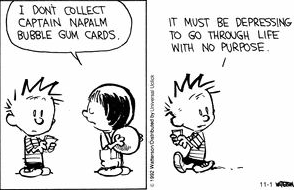 "You're referencing literature I have no way to be familiar with!"
— Anya, Buffy the Vampire Slayer
Advertisement:

Fan myopia is when fans of a work project their opinion and viewpoint of that work onto the general populace. That might be accurate for their circle of fans, but it's very rarely applicable to the rest of the world. To put it another way, it's when a fan fails to understand that not everyone likes the work as much as they do.

It's usually a manifestation of embarrassing Fan Boy behaviour, where the fan cannot fathom that other people might not think of the work like they do. There's no room for differing opinions, no room for "casual fans", and certainly no room for non-fans. Sometimes, though, the opposite happens — the fans underestimate outside enthusiasm for the work, thinking that they're the only ones who have ever heard of it (and that makes them special). Either way, it's a self-serving way to think about it — they're part of the fandom, and thus they're cooler and better than everyone else.

It can even happen within a fandom, where a subset of the fandom projects their views on the work to the fandom as a whole. This often happens when the sub-fandom sees their own subtext in the work and insists on it. Given the things fandoms like to focus on, this usually leads to shipping wars. These kinds of fans cannot fathom the concept of a fan, even a die-hard one, not accepting the idea of Fanon (or indeed, of Shipping). It also creates issues where there is more than one version of the work — e.g. a film adaptation, or a foreign translation that's not exact — and a sub-fandom considers their version definitive and is unaware of (or disdainful of) the existence of any other version, even the "original".

Fan Myopia is exacerbated by the Internet, which is very good at connecting people with narrow fields of interest and creating an echo chamber — if you can spend all your time talking only to people who think the same way you do, it becomes natural to assume that anyone you might encounter elsewhere will also think this way. Without exposure to competing viewpoints, it becomes difficult to gain a handle on one's own opinions, even if you try. Age is also a factor — people tend to be unfamiliar with works that came before they were born, and they tend to think their favourite works are more groundbreaking and revolutionary than they really are.

Naturally, this is not limited to individual works; it can apply to whole genres and media as well. There are a lot of different ways to get your fill of tropes.

A Sub-Trope of Opinion Myopia, the more general phenomenon of a person believing that everyone else shares their opinion about something. See also Fan Dumb, the natural consequence of Fan Myopia, which usually comes from total loss of perspective about the importance of one's favorite work.

Fan Myopia can lead to behavior such as:

Here at TV Tropes, we're not immune to Fan Myopia, nor do we claim to be. Indeed, much of this wiki could not have come about if it weren't for zealous fans of television and non-television media. However, generalizing from your own experience is usually a bad idea. We ask that Tropers still keep a check on their own biases, as extreme forms of Fan Myopia can lead to bad troping practices that we want to avoid, like: