It's Popular, Now It Sucks! 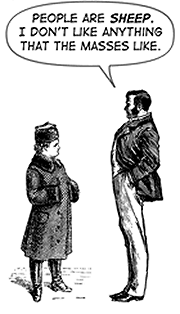 "Posers! I hated Zoidberg before it was cool."
— Bender, Futurama, "A Taste of Freedom"
Advertisement:

You'd think that your favorite artist making it big by reaching Stage 5 of the Fandom Life Cycle would be something to celebrate. To certain segments of the fandom, however, a wide fanbase only means that the media in question has "gone commercial" and "sold out." This results in a subsection of both Fan Dumb and Unpleasable Fanbase.

Sometimes a valid complaint — fans might call foul when a previously creative artist starts Pandering to the Base or watering down their work to appeal to the Lowest Common Denominator. Fame can also have a bad effect on the artist's attitude — if they don't become a complete egomaniac who treats fans like dirt and turns their back on the scene they became famous in for a newer, more famous crowd, they might become disillusioned by fame. On a practical level, more popular live shows may require bigger, less intimate venues — shows known for energy and spontaneity may move towards a heavily produced and choreographed live show. Low budget works known for cheesy effects and bizarre plots might switch to a slicker, more commercial style and "safer" plots, while Ensemble Dark Horse characters may be excessively milked and/or Flanderized into shallow parodies of themselves — see also They Changed It, Now It Sucks!.

This is usually a side-effect of the Newbie Boom and Gateway Series tropes. If the work or creator suddenly becomes "mainstream" or more popular, there's a chance that the newcomers would have contrasting opinions with the older fans who were there when the fanbase was still "niche".

Big fandoms tend to attract Misaimed Fans, and bring along a lot of Fan Dumb. Sometimes these newer fans are rabidly devoted, even starting fights with older fans or people who don't like the work "enough". Sometimes, the newer fans might complain about certain aspects of the work that older fans have already been accustomed to. Tensions also rise when the new fans represent a demographic shift in the fandom. More subjectively, popular fandoms are more likely to be subject to Hype Backlash if reality cannot possibly match the hype. (See also Wolverine Publicity, when a fandom is just plain overexposed.) This attitude can also contribute to Fandom Rivalries if a work becomes popular at the apparent expense of another, as fans of the latter work may become resentful towards fans of the former and blame them for their favored work not receiving the attention and success it deserves.

Of course, a lot of the tension is just snobbery — original members of a small fandom feel less special when their exclusive club is open to the masses. Some also seem to believe that artists should work and create art solely for the sake of art, with no consideration for things like paying rent.

Sometimes this perception can be a bit of a fallacy — high profile works are more prone to being picked apart by critics, while small creators are looked on more favorably or even immune to criticism.

Compare Periphery Hatedom, who never liked it in the first place. See also Ruined Forever, Fandom Life Cycle, and Popularity Cycle. Contrast Complaining About People Not Liking the Show. When musicians hold this opinion for one of their own songs, it's a Black Sheep Hit.

"This page was awesome...until everyone started adding examples. Now this page sucks."

Kuradeel's hatred of Kirito stems from how he managed to convince Laughing Coffin to sellout and become more popular, resulting in the authorities cracking down on them.

Alternative Title(s): Its Popular So It Sucks, True Art Is Not Popular, Reverse Bandwagon Effect, Complaining About Shows Everybody Likes

Kuradeel's hatred of Kirito stems from how he managed to convince Laughing Coffin to sellout and become more popular, resulting in the authorities cracking down on them.