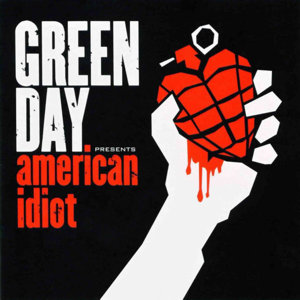 Nobody likes you
Everyone left you
They're all out without you
Having fun.
"Don't wanna be an American Idiot
Don't want a nation under the new media
And can you hear the sound of hysteria?
The subliminal mind fuck America"
— "American Idiot"
Advertisement:

American Idiot is the seventh studio album by Green Day, released in 2004. The album was essentially responsible for their comeback after the huge expectations that their 1994 breakout album Dookie rose remained unmatched by their next three albums, with their most recent release (Warning:) reaching all-time lows in commercial sales.

An ambitious Rock Opera Concept Album, American Idiot is a Coming-of-Age Story following the Anti-Hero protagonist, Jesus of Suburbia (JOS, Johnny in the Musical), as he matures from a rebellious youth to a jaded adult.

As a teenager, JOS is cynical of society and dissatisfied with his life as an every-man in his town, desensitised by a steady diet of soda pop and Ritalin ("Jesus of Suburbia"). The song also introduces a rage vs. love theme prevalent throughout the plot.

JOS decides to leave his broken home and seek a new life for himself in the city. Here, JOS meets St. Jimmy, the son of a bitch and Edgar Allan Poe, a punk rock freedom fighter ("St. Jimmy"). St. Jimmy can be interpreted as an actual person and a bad influence on JOS, introducing him to drugs ("Give Me Novocaine"), or as an alternate personality JOS creates for himself, representing blind, self-destructive rebellion.

JOS is also introduced to Whatsername ("She's A Rebel") and they begin a romantic relationship. JOS is attracted to Whatsername's rebellious, troubled nature. However, because of the combined influence of St. Jimmy and JOS's drug addiction, Whatsername leaves JOS ("Letterbomb"). St. Jimmy commits suicide and JOS leaves the punk scene ("Homecoming"). Eventually he conforms to a normal life and forgets Whatsername, only remembering her face ("Whatsername").

The album won several awards, with the most notable ones being two Grammy Awards for Best Rock Album and Record of the Year ("Boulevard of Broken Dreams"). It also received five more nominations including for Album of the Year.

Starting in 2009, Idiot received its own Broadway musical

that won two 2010 Tony Awards for Best Scenic Design and Best Lighting Design, and was even up for the Best Musical award as well. On top of that, it won the 2011 Grammy Award for Best Musical Show Album. In turn, a documentary depicting the album's journey to Broadway was released in 2013 under the name Broadway Idiot, premiering at SXSW 2013 and later going into select theatres as well as to VOD. The movie received mixed reviews.

A movie was once being planned.

However, by 2020, the film was scrapped for unknown reasons.

Also provided the basis for the mash-up album American Edit by "Dean Gray", which remixes tracks from the album with an extremely diverse range of other songs, ranging from Bryan Adams and The Offspring to The Beatles, the Bangles, Queen and the Doctor Who theme. It's surprisingly good and expands on the plot of the album. The band's label objected to the mash-up, but Billie Joe Armstrong supposedly heard it and approved.