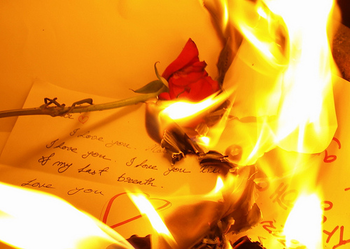 Breaking up is hard to do. It’s bad enough that your significant other is out of your life, but did they really have to leave all that stuff behind? Whether it’s things they gave you or things that remind you of them, they’ve got to go. So grab some matches, it’s time for a Break-Up Bonfire!

The Break-Up Bonfire is usually ceremonial and perhaps even a little spiritual. As fire is a symbol of both destruction and rebirth, a breakup bonfire typically represents a character breaking old bonds and starting anew. However, note the Unfair Sex nature of this trope. A woman doing this is usually celebrating her freedom from an oppressive male. A man doing this usually is the oppressive male, and a spiteful, destructive bastard at that. As such, most examples below are from female characters burning her ex's things.

A variation both of Defenestrate and Berate and Burn Baby Burn and a subtrope of Let the Past Burn.