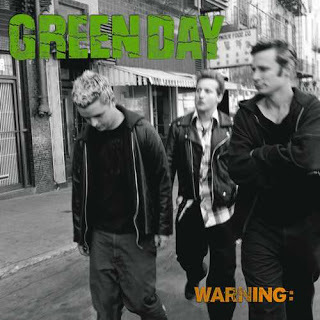 Their previous effort, nimrod. (1997), saw a break from the band's regular formula to create more diverse music. This experimentation was built upon by Warning:, which almost entirely eschewed the band's established punk rock sound, emphasizing acoustic elements with bits of other genres like folk with more optimistic and inspirational thematic material.

Considering this drastic style change, critics were fairly polarized between commending the new direction and being blindsided by one of the most gloriously apathetic bands of all time now making pop songs of faith and hope. However, in the years following, Warning: was fairly Vindicated by History, with many admitting that the album was awfully overlooked.

It is, however, the band's first major-label album to not receive platinum status. It is certified gold by the RIAA and has sold 1.2 million copies as of December 2012.

Will you trope with me on Friday night?