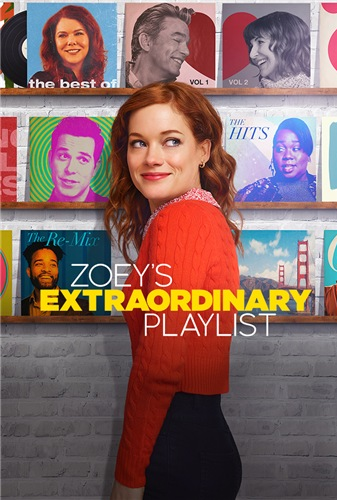 She can hear the soundtrack of your life.
"Look, songs are all just an expression of our deepest wants and desires: joy, pain, heartbreak, yearning, forgiveness, revenge. Good music can make you feel things you can't express in words."
— Mo
Advertisement:

Zoey's Extraordinary Playlist is a live-action comedy series premiering on January 7, 2020 on NBC. The story focuses on Zoey (Jane Levy), a young coder working at a tech firm and up for a promotion in the near future. Several months ago Zoey's father was diagnosed with a brain disorder, leaving him in a partially paralyzed state. In fear that she might one day suffer the same, Zoey goes to have an MRI. While in the machine there is an earthquake which causes a Freak Lab Accident.

From then on, at seemingly random moments, people around her, stranger, friend and family alike, suddenly seem to burst into song and dance for no apparent reason while everyone else cannot see or hear anything of the sort. However, the songs and dance routines that she experiences all have to do with the most powerful emotions of the people performing them. Using this new gift, she, with the help of her best friend Mo (Alex Newell), has to think of the best way to harness what she can do in order to help others with their personal problems.

The second season premiered on January 5, 2021. In June 2021, NBC cancelled the series, with Lionsgate Television shopping it elsewhere following a rejection by Peacock. On December 1, 2021, the Roku Channel (which carries past seasons of the series) released the film-length Zoey's Extraordinary Christmas, which also serves as a Grand Finale for the series.

Now has a Character Sheet and recap page.