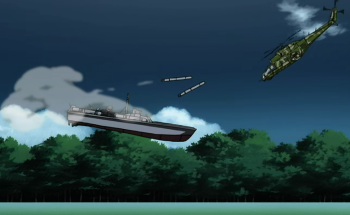 Ramping a PT boat off a derelict tanker in order to torpedo a helicopter. Who would see that coming?
"While most agree that the financial theory behind the scheme is 'crazy,' others counter that the idea of flying a hot-air balloon filled with dry ice over Wall Street is so outside the realm of conventional thinking that, paradoxically, it just might work."
— The Onion, Fraternity In Danger Of Losing House Launches Harebrained Scheme To Fix Economy

In real life, when someone is in serious trouble, they, even on the fly, have to think of a logical, sensible, and reasonable strategy that can get them out of it with as little loss as possible and in the best conditions possible.

In movies, the characters can make the most irrational, nonsensical, or plain dumb decisions, and it works!

Because it's Crazy Enough To Work, that's why. Sometimes characters will even credit it to it being crazy (enough to work). A possible example would be something along the lines of "What about patching up the nuclear reactor with a pack of gum and peeing on the fire from the top of the reactor? That's so crazy, it just might work!"

Although heroes of every genre will come up with these, expect a lot of them from Badass Unintentionals, since they lack the knowledge, strength, and sometimes even the courage to come up with a better idea.

Lampshaded frequently enough that it's become a Stock Phrase (especially if one of the characters is Genre Savvy — it's not uncommon for In-Universe media to have a love for this kind of thing).

Routinely pulled off by Cloud Cuckoolander characters. Compare Million-to-One Chance; the less probable a plan is to work, the more likely it will succeed in Hollywood conditions. See also It Runs on Nonsensoleum and Refuge in Audacity (which run on a similar premise) and It Will Never Catch On (which is a specific type of joke that invokes a similar reaction in the audience). See also Actually a Good Idea when people acknowledge its effectiveness and Confusion Fu for people who weaponize this trope.