Video Game / The Legend of Valkyrie 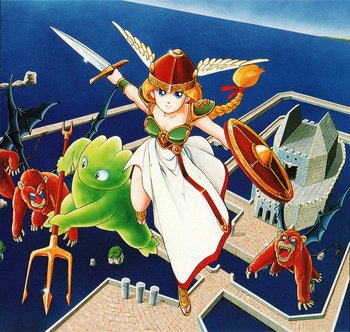 The Legend of Valkyrie (Valkyrie no Densetsu) is a series of Japan-only games developed by Namco. The first game in the series, Valkyrie no Bōken: Toki no Kagi Densetsu (The Adventure of Valkyrie: The Legend of the Time Key), was released for the Famicom in 1986. It was notable at the time for being one of Namco's first games to feature a female lead, following The Return of Ishtar's Ki and Baraduke's Kissy. It was also an early example of RPG Elements (such as Experience Points and stat growth) and a Wide-Open Sandbox style of gameplay in what was nominally a top-down action game. The game's release date was mere months after The Legend of Zelda, but while the two games share many gameplay aspects in common, Valkyrie no Bōken is even more open-ended, providing little in the way of concrete goals.
Advertisement:

The storyline takes place in a world called Marvel Land and involves the awakening of an ancient time god named Zouna, who was trapped within the Abyss of Time in a clock tower many centuries ago. One day, the clock tower stops working, and when its Time Key comes unwound, Zouna is freed. Intending to take total control over Marvel Land, Zouna hypnotizes the local Sandra to do his bidding. The Goddess of Marvel Land hears about the people's suffering, and sends down her sword-wielding warrior maiden, Valkyrie, to resolve the issue. Over the course of the game, Valkyrie upgrades her armor, befriends a Sandra named Kurino, retrieves the Time Key, and seals Zouna back in the clock tower.

Valkyrie no Bōken was a hit for Namco, but never left Japan, a fate shared with many other titles in the eventual series. The game's success spawned the creation of a sequel, Valkyrie no Densetsu, which was released in arcades in 1989 and converted to the PC Engine in 1990. It was a major technological advancement over its prequel; besides integrating dynamic scaling and rotating sprite effects, it also included co-op multiplayer and a system of currency obtained by defeating monsters. To work as an arcade game, the gameplay was retooled into a cross between a top-down action game and a Shoot 'Em Up, with Valkyrie utilizing Sword Beams as her primary weapon, while the level design was made significantly more linear.

After hearing about a conflict involving the wish-granting Golden Seed, Valkyrie yet again descends from the heavens to return the Seed to its rightful place in the North Spring. Now with the assistance of Kurino, who's taken up a trident, the two of them discover that the demon Kamuz wants to use the Golden Seed to control the planet. The heroes travel across the world to confront Kamuz at the North Spring, and defeat his minions along the way. They also come across helpful characters: the wise magician Babasama teaches them spells, and the shifty-looking salesman Zul sells powerups.

Valkyrie no Densetsu was just as well-received as its prequel, if not more; in 1991, it was rated the best arcade game of all time by readers of the Japanese magazine Gamest. As a result, a miniature franchise sprung up around the series, with spinoffs, a visual novel, and a manga released through the 1990s. Even so, the game wasn't exported in its original arcade form, likely due to its high level of difficulty and a significant amount of Japanese text. A spinoff starring Kurino, Sandra no Daibōken, was given a European release, but it was renamed Whirlo and any ties to the Valkyrie series were cut. It wouldn't be until the 1997 release of Namco Museum Volume 5 that The Legend of Valkyrie was given an official English translation.

Valkyrie no Bōken also received a remake on the Namco Anthology 2 collection, paired along with the original Famicom version; the remake retools the game to more closely resemble the gameplay of The Legend of Valkyrie, being more linear with a heavier focus on story. Valkyrie herself continues to make appearances in Namco games, including crossovers such as Namco × Capcom and Project × Zone.

As part of Namco-Bandai's ShiftyLook project, the game also received a web comic called Legend of the Valkyrie; examples applying to it can be found on that page.

The Legend of Valkyrie contains examples of:

Alternative Title(s): Legend Of The Valkyrie