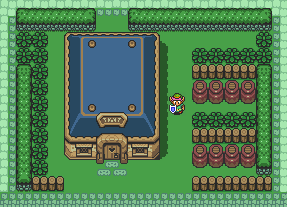 Perspective doesn't work this way.
A method of portraying three dimensional space in a two-dimensional plane. Basically, it's a tilted bird's eye view perspective in which both the top and front of an object is seen at the same time, and the vertical axis indicates both height and depth.note Technically speaking, it's a very distant bird's eye view, zoomed to very high levels, with perspective not working "properly" because of high viewing distance.
Advertisement:

Most games that have this perspective will still have character sprites as if they've being viewed straight on, though some will have a more Super-Deformed style. (This was the usual way of drawing character sprites and things like trees in older games dating back to the Atari 2600, though the lack of graphical detail caused by low resolutions and limited memory generally disqualify such games as examples.)

Very popular during the 16-bit era for JRPGs, as well as RTS games in the 1990s.

Despite console games having largely abandoned this style in favor of full 3D graphics, it remains popular in handheld systems due to the lower demands on the system, although its appearances even there are growing rarer as portable hardware becomes more powerful.

This view sometimes leads to secrets being hidden on the backs of buildings, which should logically be visible to the character but aren't to the player.