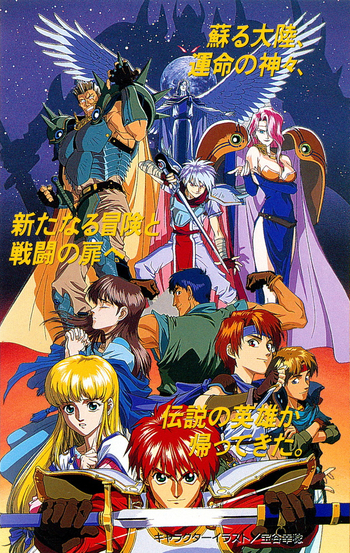 Ys IV: The Dawn of Ys is the second of two Ys titles released as "Ys IV", the other being Ys IV: Mask of the Sun. Like the latter, series creator Falcom licensed out development to Hudson Soft, who also published it, and released it exclusively for the PC Engine on December 22, 1993. It remains the only non-Spin-Off Ys installment to remain on a single platform.

This version of Ys IV is also a Prequel. Two years after his adventures on Esteria, Adol returns to the island town of Minea to catch up with old friends, but leaves afterwards to travel to the region of Celceta on the Eresia mainland. When he arrives in the region, he hears about monsters increasing in number thanks to the actions of The Clan of Darkness, something that might be connected to the very evil Adol was summoned to fight.

Since Mask of the Sun was originally meant to be the canon version of Ys IV when Falcom released an official Ys timeline, The Dawn of Ys was Retconned out. However, some narrative elements of this game would be recycled in the Video Game Remake Ys: Memories of Celceta, which also takes a few things from Mask of the Sun

This work provides the following examples: