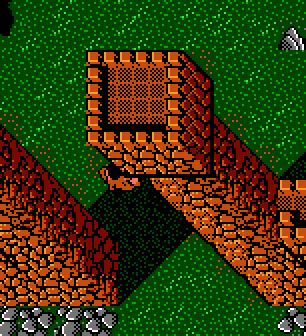 The tower is blocking him.
"There's even enemies that you can barely see, like this tiny mouse on the fence in the background. (The tiny mouse somehow hits Dorothy) Like are you kidding me? That doesn't even make sense from a perspective view-point. She's like standing in front of the fence."
— The Angry Video Game Nerd on The Wizard of Oz for SNES
Advertisement:

Before the days of 3D graphics, games had three layers: the background, the foreground, and the "main layer" in between that the player actually resided on. Logically, the main layer is where the action happens. Sometimes the foreground might block your view, and some guys may attack from the background, but that's it.

When this trope is in effect, you can throw that thinking out the window. Those Goddamned Bats clearly flying in front of bricks that block you will still kill you with Collision Damage if you get near them. See that thunderstorm in the distant background? It'll kill you if you're in front of it when lightning strikes. If you're lucky, you can use this trope yourself and shoot through walls too, but a lot of the time, only the enemies get that luxury.

This is like Depth Deception minus the logic. The enemy or object in question isn't actually especially big or small... it just somehow affects you even though it shouldn't actually be crossing your path. Depth Perplexion allows developers added flexibility when creating enemy code, allowing them to do things that aren't actually possible, but work intuitively from the game's perspective.

Most of the time, it's a form of Fridge Logic as only blatant examples are likely to be noticed as they're happening. It's very common in Three Quarters View, and likely to appear in games with Isometric and Side Views as well. Optical illusions such as the Penrose staircase

make it Older Than the NES.