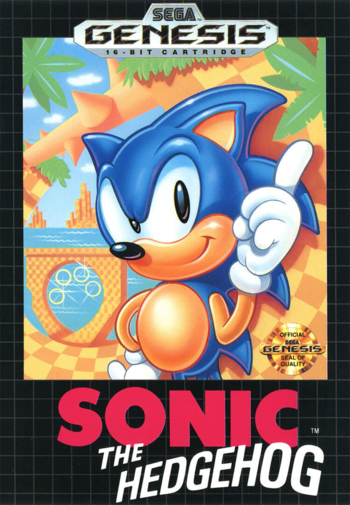 C’mon faster. Because here comes Sonic The Hedgehog.™ He’s the fastest critter the world has ever seen, and he’s a hedgehog with major attitude.

Watch him smirk in the face of danger as he blazes his way through hilly pastures, underwater caverns, marble ruins, strange cities and a cybernetic world of enemies in a race to save his buddies.

Sonic’s got everything a hedgehog could ever want: tricks, gadgets and speed. So don’t blink or you just might miss him.
— Magazine Ad for the game.

Released in 1991 for the Sega Genesis, it marked the beginning of Sega's beloved Sonic the Hedgehog franchise and is one of the most iconic games of the 16-bit era. Both it and an 8-bit Master System / Game Gear counterpart were released in 1991.

The story begins on the fictional South Island, where the insane scientist Dr. Eggman (or Dr. Ivo Robotnik) is gathering up the intelligent animals that live there and systematically transforming them all into "Badniks" — an army of Robot Soldiers. Using this army and South Island's six Chaos Emeralds, he intends to conquer the planet. Unfortunately for Eggman, there's one problem. The island happens to also be the home of Sonic: an unusual blue hedgehog who possesses razor sharp quills, the power to run at supersonic speeds, and an attitude. Not only is Sonic far too fast to be caught, but thanks to his sense of justice, he's made it his mission to free his friends and take the fight to the doctor's doorstep.

It practically re-defined the platforming genre by adding branching paths and physics-based obstacles such as loops and slopes. In addition to the touted high-speed gameplay, gamers of the time were astonished by the impressive graphics, as well as the catchy soundtrack by Masato Nakamura of the Japanese pop group, Dreams Come True. Sonic the Hedgehog put the Genesis on the map and was a catalyst for the console dethroning The Big N with a 65% market share over the Super NES during the 16-bit Console Wars. This was by far the best-selling game for the Genesis/Mega Drive with over 15 million units sold worldwide.

The game is comprised of six "Zones" with three "Acts" each. The Chaos Emeralds are obtained via collecting 50 or more rings and leaping into a Giant Ring, which appears at the end of Acts 1 or 2 as Act 3 almost always ends with a boss encounter. No 2½D Special Stages like in most Sonic games, but the entire maze rotates as Sonic tries to avoid hitting the flashing-red "GOALS." These ironically-named bumpers evict Sonic from the Stage and cost him a shot at an Emerald. There's no further reward to collecting the Chaos Emeralds other than an extended ending, making them a challenge solely for experienced players.

Sonic the Hedgehog was also remastered for iOS and Android devices, and was released in 2013. This remaster was completely rebuilt from scratch while using a new engine, featuring HD 60 FPS presentation with proper widescreen, a remastered soundtrack, and other quality-of-life improvements. Like Sonic CD's HD remaster, it was developed by Christian "The Taxman" Whitehead (who later headed up Sonic Mania), though this time in collaboration with Simon "Stealth" Thomley. Not only does it allow Tails to be playable (and even follow Sonic and carry him while flying à la Sonic 3, unlike the HD remaster of Sonic CD), but it finally accomplished what the Lock-On Technology of Sonic 3 & Knuckles tried to do and what had once only been possible in an unofficial ROM hack by Stealth himself: make Knuckles playable. On June 22, 2017, the remastered version of Sonic the Hedgehog was added to the Sega Forever service as an ad-supported free-to-play game. Both the original and remastered versions of the game, along with those of Sonic CD, Sonic the Hedgehog 2, and Sonic 3 & Knuckles, are included in Sonic Origins, released June 23rd, 2022.

The game received two obscure tie-in comics: a three-part Japanese manga whose first volume is believed to predate the release of the game, as well as a one-shot American comic released months later.

Don't just sit there and waste your precious time. When you want to do something, do it right away. Do it when you can. It's the only way to live a life without regrets.
Feedback