A Winner Is You 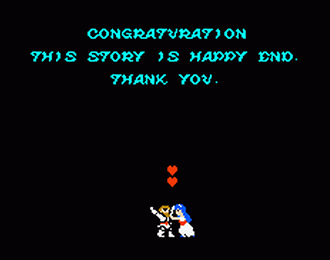 "One paragraph? This game's ending is one paragraph? I played through this whole fucking game for ONE PARAGRAPH!?"
— The Necro Critic on Ehrgeiz Quest Mode's ending
Advertisement:

Let's say you have been through this incredibly long and Nintendo Hard game in one sitting (because you can't save and don't have passwords), until you finally finish the game and defeat the last, incredibly hard boss. The moment of truth has come, you wait for the epic, satisfying ending and you get...

"CONGLATURATION !!!" on a black background, in perfect silence, and nothing more (except maybe the credits, which are equally unentertaining, and arguably worse since you often can't skip them but want to stick around to see if anything comes after them).

Hey, you should be grateful. Some games just show you the same screen that introduces each level, except the name of the level is "you win" and the game goes back to the title screen afterwards. If you're really unlucky, all you get is the same Game Over screen you'd get for dying.

The urge to throw the game out the window is overwhelming, to say the least.

This is most likely to happen with older Fighting Games, Arcade Games and the like. In the olden days, when Excuse Plots were the norm, it was natural for developers to put more effort into programming the game itself than designing an elaborate ending. Memory limitations also worked against satisfying endings; adding just a couple of kilobytes of ROM to a console game was once a luxury, and old computer game developers tended to cut corners to prevent game data from exceeding available RAM space and requiring players to go back and load more of the game from a slow cassette tape.

Early consoles had less space for flashy graphics and animations, so only endings that are bad even by the standards of their technology (a previously seen screen, bad spelling, etc.) should be considered true examples of this trope. In some more recent games, this only happens on Easy mode, so there is a cool ending to reward you. For later consoles and platforms which had more space for impressive endings, A Winner Is You endings indicate not only a job poorly done, but the programmers' (or producers') laziness for not having considered how to end the game.

A cousin to, if not the most extreme form of, the Cosmetic Award. Compare to No Ending for a similar lack of closure or a very abrupt ending in other contexts. See also Disappointing Last Level. Even more frustrating is if, when you lose, a game with this kind of ending gives you a Have a Nice Death or an It's a Wonderful Failure screen. A few of these will also throw in The End... Or Is It? while they're at it. Another tactic is to display the player's meaningless score in an attempt to add purpose to the ending screen. Also, a rushed programming job often affects what happens afterwards, leading the player to the stock Game Over screen or back to level one afterwards, instead of back to the title screen.

Unrelated to This Loser Is You.

contains examples of ending from hundreds of Commodore 64 games, and each one is rated; those which are rated 4 or lower are typically examples of this (not even including the "No Ending" section).

As this is an Ending Trope, most spoilers are unmarked. Beware if you wish to be spared some awful disappointment in seeing your favorite games here.

If you wander off-screen, or get killed by walking to where Zaks was, then the screen pauses and the final tune plays, but you don't get to see the end of the text scroll by either.