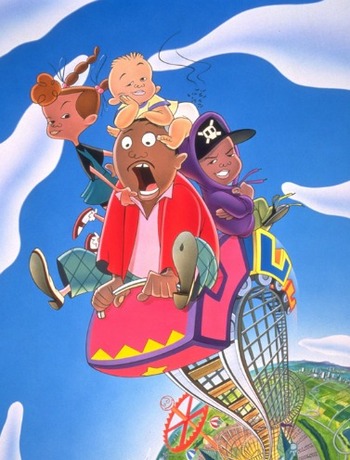 "We don't die... we multiply!"
"It's animation! With an attitude!"
—Tagline from the trailer
Advertisement:

Based on a comedy sketch

made popular by the late stand-up comic Robin Harris, Bébé's Kids was the first animated film to feature an all-black cast.

The comedy follows an animated Robin Harris (voiced by Faizon Love) taking his new girlfriend Jamika (voiced by Vanessa Bell Calloway) and her son Leon (voiced by Wayne Collins Jr) to an Amusement Park called Fun World. This would be all well and good, but when Jamika is asked by her friend Bébé to watch her kids for the day, he's forced to take along Bébé's Kids, who are nothing short of (and quite a bit beyond) obnoxious brats who basically wreak havoc through the whole park. Hilarity Ensues.

Theatrically released in 1992 by Paramount Pictures, the film was a box office bomb. Despite this, it developed a Cult Classic over time. However, it also spawned a SNES game so bad Nintendo Power rated it the worst game they've ever reviewed.

Many of the animators went on to work on The Proud Family alongside Bébé director/Proud series creator Bruce W. Smith, who also proceeded to animate the villain for the second animated feature to have an all-black cast, The Princess and the Frog. Reginald Hudlin, who executive produced the movie with his brother, would go on to work on an early pilot for The Boondocks.