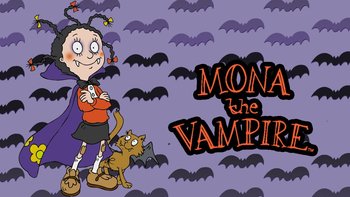 She's a nice ordinary girl in an extraordinary world!
Advertisement:

Mona the Vampire was a Canadian/French animated series adapted from a series of British children's books written by Sonia Holleyman. Produced by Canada's Cinar Corporation and France's Alphanim (now known as Gaumont Animation) for YTV, the show ran from 1999 to 2003 with 65 episodes over 4 seasons.

The show is about Mona Parker, an average girl living in an average small town. Not that she's content with it. Obsessed with the supernatural and the unexplained, Mona's overactive imagination leads her to believe that all kinds of paranormal creeps and occurrences are drawn to her town. To stop these baddies and solve these mysteries, Mona dons a wig, fangs, and a cape that could give Dracula a run for his money to assume the identity of the heroic Mona the Vampire. Assisting her are her faithful pet cat Fang, along with her two best friends, Charley Bones and Lily Duncan, who join her in thwarting the scary monsters and freaky phenomenon they are convinced occurs around town under their own special alter egos, Zapman and Princess Giant.

Show us your tropes! HEY MONA!!: