Video Game / The Simpsons: Bart vs. the World 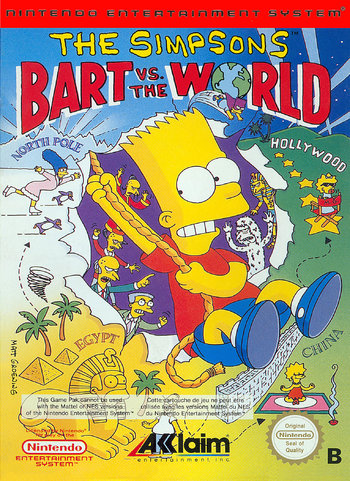 The Simpsons: Bart vs. the World is the second of two Platform Games released by Acclaim in 1991 based on characters from The Simpsons. Originally developed by Imagineering (who also developed the game's predecessor, Bart vs. the Space Mutants) for the Nintendo Entertainment System, it was ported to the Amiga, Atari ST, Sega Master System and Game Gear.

The game sends Bart on a tour of three continents, ostensibly for winning first prize in a dubious art contest hosted by Krusty the Clown, but really as a plan for the contest's judge and sponsor, Mr. Montgomery Burns, to fulfill his vendetta against Bart and his family.