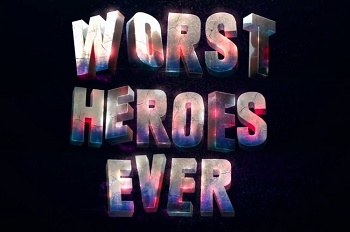 Worst. Image. Ever.
"Last night's Itchy & Scratchy was, without a doubt, the worst episode ever. Rest assured I was on the Internet within minutes registering my disgust throughout the world."
— Comic Book Guy, The Simpsons, "The Itchy & Scratchy & Poochie Show"
Advertisement:

So Alice and Bob have just finished a harrowing experience and a witty one liner is needed to sum up the entire situation. What ever will our intrepid heroes do?

This is a Stock Phrase used to quickly demean and insult something or someone. It is normally delivered in a flat, sarcastic voice, but can also be yelled at in stressful situations. It often occurs during or after a heavy action or chase sequence, to refer to an activity that would normally be quite enjoyable if it weren't for the life-threatening situation that was just encountered.

The Trope Maker is Comic Book Guy from The Simpsons, who frequently denounces whatever he doesn't like as the "Worst. <X>. Ever." Though, as indicated by the quote, first said when he viewed the introduction episode of Poochie in Itchy & Scratchy.

A more verbose variant would be to say, "This is the worst X in the long history of X..."

Then she plays it for two days straight.

The Worst Night Ever

The Mane Six meet Spike at Pony Joe's donut shop where they confess their "best night ever" has turned into the "worst night ever".

The Worst Night Ever

The Mane Six meet Spike at Pony Joe's donut shop where they confess their "best night ever" has turned into the "worst night ever".