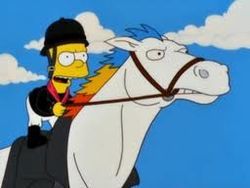 Homer and Bart rescue a horse from a cruel sideshow attraction and train it to be a badass on the racetrack, which irks a secret society of jockey elves. Meanwhile, Lisa files a complaint to President Bill Clinton over an unfair judgment at the county fair's Battle of the Bands.