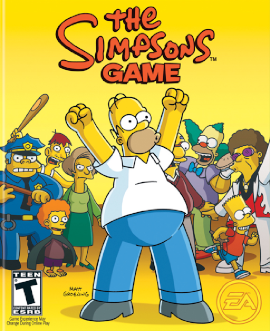 "The only Simpsons Game I can think of is the one where we all pretend Dad isn't an alcoholic."
— Bart
Advertisement:

The Simpsons Game is a platformer based on The Simpsons. It's also an Affectionate Parody of loads and loads of other games, and lampshades just about every trope they can think to lampshade.

Each character has their own special powers: Homer can become a giant ball and smash into things; Bart becomes Bartman, and is able to glide and shoot with his slingshot; Lisa can harness the power of the Buddha and stun enemies with her saxophone; and Marge can rally up supporters and is able to send Maggie into small gaps.

During the game, Bart finds the manual to The Simpsons Game, from which the family discovers their superpowers. As they realize the full potential of their new powers (i.e. abuse them), the story quickly goes to crap as new menaces - no matter how illogical or extraordinary - threaten to change their lifestyle. It's up to them to fight back parody after parody of video game media to set things right again.

Notable that it came out a few months after The Simpsons Movie was released, although they aren't connected beyond both being The Simpsons media. Also gets points for having both the writers and the original voice cast brought on to help with its development.

Cliche Unlocked: TV Tropes Page "Because every thing must be on a website for people who spend too much time listing stupid, common things like a stupid nerd.