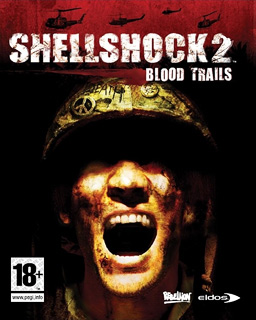 Shellshock 2: Blood Trails is a First-Person Shooter for PC, Xbox 360, and Playstation 3. It was made by Rebellion Developments and published by Eidos. Basically, it's the Vietnam War if the Vietnam War had zombies in it. As its name suggests, its a sequel: the first game was called Shellshock: Nam '67, and didn't have the zombies. The games had different developers, but the same publisher.

The game puts players in the role of Nathaniel "Nate" Walker, the brother of Cal (the first game's protagonist). It begins with Nate being taken to see Cal, who has been infected by a zombie virus (or close enough - whether they're technically zombies is unclear and probably depends on your definitions anyway, but they fit the template). It's hoped that the family link will allow Nate to get some crucial information out of the captive Cal: specifically, the location of "Whiteknight", the source of the infection. The U.S. military would quite like his brother Nate to go find it, please. A North Vietnamese officer named Trang is also interested, and tries to compel Nate to divulge what he knows. Nate spends the game fighting his way through various enemies (zombies, communists, zombified communists...) in an attempt to reach Whiteknight and do something about it.

Compare with the Half-Life mod Heart of Evil.