Video Game / The Sims: Bustin' Out 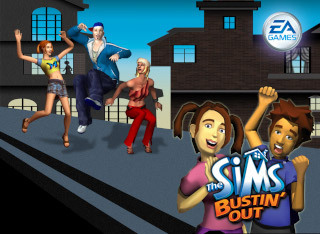 The "Bust Out" storyline in the game takes place after the events of "Get a Life" from the first game, although your Sim is suddenly down on their luck and has lost everything, being forced to move back in with your Mom after she gets a divorce from the dastardly senator Malcolm Landgraab. Your Sim has to make their way back to the top of their chosen career path and get revenge on Malcolm, as well as helping the various other Sims you encounter along the way.

What sets it apart from the first game is the titular ability to "bust out" with a vehicle and visit a number of locations in the game in order to fulfill goals, build your skills, and interact with the inhabitants. No longer was your Sim limited to staying in a single lot for a level.

Bustin' Out improved on a number of things from the first console version, including dozens of new social interactions, improved graphics and gameplay, and overall more depth and character. It also spawned a mobile versions for the GBA and N-Gage, which was more in the Adventure Game genre, but still had standard Sims elements such as fulfilling needs and building relationships with other characters.

The Sims: Bustin' Out provides examples Of: