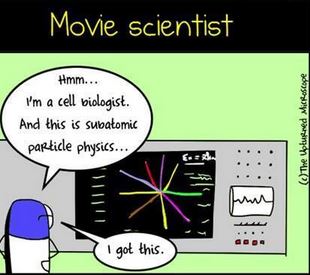 "Do you know how many degrees I have?!"
— Dr. McNinja, The Adventures of Dr. McNinja
Advertisement:

Related to the Nerd and the Mad Scientist, the Omnidisciplinary Scientist is a master of every branch of science, regardless of the branch in which they theoretically have a degree. A writer either didn't do the research or didn't want to. If someone is a scientist, and something about science needs to be known, the scientist will know it or learn it by the end of the episode.

Films are particularly bad about this. It's understandable that a producer needs to reduce the number of named characters, so anything "scientific" is handled by the existing "science guy" character. However, it strains Willing Suspension of Disbelief when the guy who was just working on the nuclear reactor turns around and is suddenly a xenobiologist, chemist, alien technology expert and computer programmer as well.

Then again, maybe the character really is just that smart, running around with superheroes and aliens and unbelievable circumstances of all descriptions, it certainly wouldn't be the strangest thing going on in that fictional universe.

Any of The Professor, The Spock, the Mad Scientist, Mr. Fixit and the Genius Bruiser may be an Omnidisciplinary Scientist. The Science Hero and the Hollywood Nerd tend to be one in practice. The medical variant is the Super Doc.

Compare to the Renaissance Man who is also very knowledgeable in multiple fields — but not necessarily all of them. Some of these fields may be arts such as painting, or literature. May possess Encyclopaedic Knowledge if their interests stray outside of science.

Note also that the "plausibility" of this trope is context-dependent. If a story presupposes an immortal character, for example, that character might well have had time to master many disciplines of study (though perhaps not to be up on the latest developments in all areas). Likewise, a non-human mind might be capable of anything, or a future/alien technology might enable learning by means other than the hard way, or the character has Super Intelligence as a power. Or, like the Doctor, all of the above.

This is part of the Hollywood Science belief that big things are made by a single "scientist" (sometimes with a bunch of useless assistants). In reality, this usually isn't the case — most developments are incremental and made through the collaboration of many people who each have special knowledge of one small part of the problem. Of course, there are exceptions which make it a bit of Truth in Television. This is also common with people who take knowledge as a hobby, trying to get as much information as possible instead of specializing in a single discipline (and as gadgeteers usually also encompass being engineers at the same time).

See also Super Doc for the medical version of this. In works of fiction, a doctor is almost always a hybrid between a medical doctor and something else (in the case of omniscience, everything else). In real life, a doctor is a physician with a doctorate of medicine (M.D.), or a Ph.D in any field, regardless of being a practitioner of medicine or not. And it should be stressed that a Ph.D is generally going to have the same fundamental core competencies (at least in theory) for their given field, but beyond that, most of their knowledge, skills, and abilities is limited to whatever was the subject of their dissertation. Generally speaking, any scientist can probably do basic statistical data analysis. But a dedicated statistician (even if he isn't a practicing scientist per se) is whom you would call for the important jobs where you really need an expert on the numbers.

The legal counterpart is an Omnidisciplinary Lawyer.

Used as one of the most common excuses to let The Main Characters Do Everything.