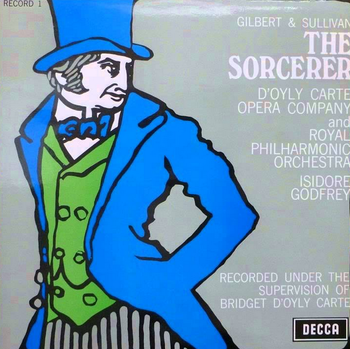 The Sorcerer is a comic opera by Gilbert and Sullivan, first performed in 1877. The first revival, in 1884, included some significant revisions (mainly concerning the end of the first act and the beginning of the second) which have carried through to later productions.
Advertisement:

The plot concerns a village in which everyone is dosed with a Love Potion by a sorcerer, with, naturally, hilarity ensuing.

The work is a parody of pastoral opera tropes and a satire on contemporary class differences.

The Sorcerer provides examples of: