Webcomic / The Non-Adventures of Wonderella 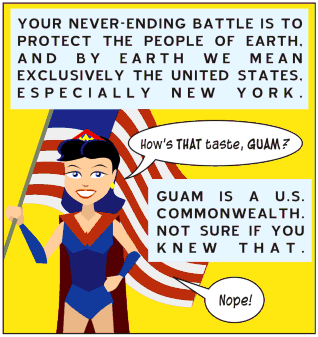 They're super over here, but not over there.
"I started out Wonderella to make an off-the-clock superhero who was an average woman instead of some 24/7 warrior... though somewhere along the line, 'average woman' became a cross between Elaine Benes and Zelda Fitzgerald."
— Justin Pierce
Advertisement:

The Non-Adventures of Wonderella

is a parody of the DC Comics character Wonder Woman and many superhero tropes in general. It focuses mainly on the mundane parts of the life of Wonderella, a lazy Ladette superheroine who demonstrates little interest in being a hero... or, in fact, doing anything much outside of partying, getting completely wasted, violence, and shopping. She is super-strong, super-durable, she can't fly but she can "totally jump hella high", when tied up she can hork up a giant octopus, she can tell plants to die,

and she can curl up in a perfect ball when traumatized.

She also has a rarely-used invisible blimp, and the tendency to make prejudiced remarks (especially about gay men, but pretty much every minority group gets a turn).

From September 9, 2006, to August 28, 2016, the comic usually updated on Saturdays, and was accompanied by a message from the writer. Starting in September 2016, Pierce decided to produce longer stories, requiring a more sporadic schedule. As of the beginning of 2022, it looks like the comic has ended, with no new updates since 2019.