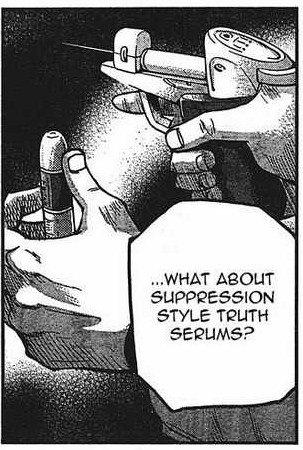 "Wait, what the hell? This was supposed to be a truth serum, not a VOLUNTEER INFORMATION serum!"
— T-Rex, Dinosaur Comics #416

The common term "truth serum" refers to any number of sedative/hypnotic drugs which are used to induce honesty in a subject. In fact, truthfulness is not guaranteed by the use of such drugs; while a person under the influence of a truth serum may become talkative, or may experience reduced inhibitions or even hallucinogenic fantasies, they are still quite capable of lying.note The idea is to hopefully get them to run their mouth and blurt out what you want to know before their brain catches up again. For this reason, and the obvious human and civil rights issues (which are similar to those regarding torture), any statements obtained in this manner are inadmissible in court. Or, they're really disgusting concoctions used in crossing the line ceremonies. The best that modern pharmacology can come up with is amobarbital (better known as sodium amytal) and is not all that useful at all.

Ah, but don't tell Hollywood that...

In fiction, truth serums of all forms (be they actual drugs, spells or whatever) behave quite predictably, and will invariably have one or more of the following effects on the subject:

If the trope-generator is positioned more towards the "Science Fiction" end of the scale, invariably the injected will start babbling about the Killer Rabbit / Ninja Pirate Zombie Robot / Little Green Men and be instantly dismissed as crazy or, at best, programmed to spout gibberish under interrogation.

While the body of this entry deals mainly with traditional truth serums, in fiction there are actually many methods of getting the truth out of someone besides drugs. These, due to being Applied Phlebotinum, can be excused for behaving as described herein. Sometimes. Maybe.

For the more historically tried and true method of extracting information by getting the victim completely sloshed on cheap booze, see In Vino Veritas.

Sub-trope of Enslaved Tongue. May overlap with I'll Never Tell You What I'm Telling You!. See also Lie Detector and Bad Liar for cases where the subject can lie but can't fool anyone.