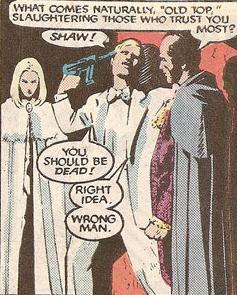 This would be how a psychic mutant pulls off a Klingon Promotion.
Quentin: No. You don't want to mess with me. I can make your mind shut off! You'd be dead in an instant!
Laurie: So that's how you would kill yourself if you were suicidal? Then do it. You're feeling very...depressed. Life's been unkind to you. No one here likes you.
[Quentin's eyes glow white and he collapses]
Laurie: My pheromones can control you completely. And they leave no trace.
— House of M
Advertisement:

One of the most dangerous weapons in a psychic's arsenal — the ability to make your enemies kill themselves. While Mind Rape is good for torture, this is a much more permanent solution to your problems, and you can even easily Make It Look Like an Accident. Usually, it requires a Compelling Voice or for the victim to have a weak mind, although there are ways to do it with Phlebotinum or Artifacts Of Doom. The victim can even remain fully conscious and aware of what they're being made to do, while bereft of any Heroic Willpower to fight it off.

Much like a Compelling Voice, this is usually a villain or Anti-Hero power. If caused by Power Incontinence, expect a My God, What Have I Done?. It should be noted, however, that simply saying "Die!" and having your opponent drop dead doesn't count if he doesn't actually take his own life.

There are times where flat-out telling someone "kill yourself" won't work: some psychics are limited by how strongly the subject objects to what they're being forced to do, and self-preservation is probably the single most powerful instinct a living organism has. With a little careful wording or maneuvering, however, it may still be possible to force someone to take their own life or at least do something life-threateningly dangerous.

Subtler variations use types of psychic power other than straightforward mind control. One option is to use illusions to trick the target into doing something lethal. Another is to afflict the target with crushing despair and make him want to kill himself. There can also be cases of More Than Mind Control, where the psychic exploits that the target already is struggling with depression and has toyed with the idea of suicide before.

This is a type of Murder by Suicide. May turn into a Murder-Suicide if the psychic forces them to take other people with them. See also Compelling Voice, the supertrope for "orders that cannot be refused", and Driven to Suicide for people being driven to suicide through normal means. A possession may lead to it directly or just by leaving a victim who outlived their usefulness in a dangerous situation. Subtrope of Stop Hitting Yourself. Compare Psychic Glimpse of Death, where someone is in another's mind at the moment of death simply as an observer.

Dance in the Vampire Bund â Ep 01 [Interview with the Vampire]: During a trivia show, one of the panelists reveals himself to be a vampire and reclaims his arm that was brought in to showcase he proof of vampires to the public. However Mina, the true leader of the vampires, arrives and decides to put the rogue vampire in his place when she confront him.

Dance in the Vampire Bund â Ep 01 [Interview with the Vampire]: During a trivia show, one of the panelists reveals himself to be a vampire and reclaims his arm that was brought in to showcase he proof of vampires to the public. However Mina, the true leader of the vampires, arrives and decides to put the rogue vampire in his place when she confront him.