Manga / Thou Shalt Not Die 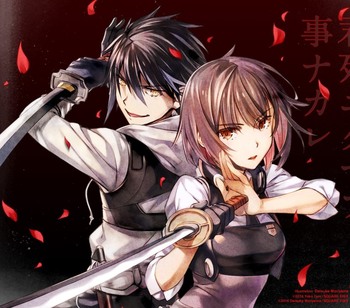 The protagonists, Kuroi (left) and Mashiro (right).
Away to the battlefield the emperor cannot go.
That be where men go to bleed and die on the "path of beasts".
Advertisement:

In the future, supernatural abilities have not only been determined to exist, but also has a whole science built around it. Through genetic engineering and extensive research, the nature of these powers have been refined to allow for a number of applications, among them: War.

Thou Shalt Not Die (Kimi Shi ni Tamou koto Nakare, 君死ニタマフ事ナカレ), written by Yoko Taro and illustrated by Daisuke Moriyama, follows the students attending the "Special Abilities Private High School", Kuroi and Mashiro, alongside their companions as they try to get through school and survive in an ever increasingly hostile world.

Also has a stage-play titled Thou Shalt Not Die Zero.