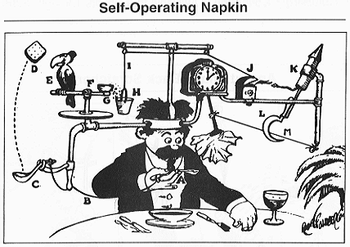 A really simple plan.note As you raise spoonful of soup (A) to your mouth it pulls string (B), thereby jerking ladle (C) which throws cracker (D) past parrot (E). Parrot jumps after cracker and perch (F) tilts, upsetting seeds (G) into pail (H). Extra weight in pail pulls cord (I), which opens and lights automatic cigar lighter (J), setting off sky-rocket (K) which causes sickle (L) to cut string (M) and allow pendulum with attached napkin to swing back and forth thereby wiping off your chin. After the meal, substitute a harmonica for the napkin and you'll be able to entertain the guests with a little music.
Advertisement:
Spencer: Hey, come check out my automatic fish feeder! I'm making it a lot more complicated than it needs to be!
Freddie: Why?
Spencer: Because it's fun!
— iCarly

The name is taken from the drawings of American cartoonist Rube Goldberg (1883–1970), which had a ridiculously complicated sequence of events to do something as trivial as giving someone a back scrub. Obviously, this is different from a traditional invention in that it gives a complicated solution to a simple problem, not the other way around. This device is also known as a Heath Robinson contraption in Britain (after cartoonist William Heath Robinson whose ideas came before Goldberg), or a Pythagoras switch (ピタゴラスイッチ) in Japan, among other terms used around the world.

A commonly-related concept is commonly invoked by players in games featuring a Level Editor (such as Line Rider, Happy Wheels and Geometry Dash), which are referred to as "auto" or "don't move" levels. Closely resembling a Rube Goldberg Machine, they follow the main character being transported through bizarre (and possibly dangerous) means through a purpose-built course, as opposed to a chain of distinct but still connected events. Such courses are almost always hilariously convoluted paths that lead to the finish line, with no player input required.