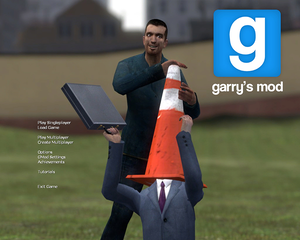 Nothing is unchangeable. Everything is imported.
Advertisement:

Garry's Mod (or GMod) is a sandbox physics game developed by Facepunch Studios and published by Valve Corporation, originally a mod created by Garry Newman of Valve's own Half-Life 2. Initially just the latter game with the rope, manhack and rollermine guns being the only additions, it has evolved considerably since then to the point of becoming its own standalone game.

As a sandbox with no set objectives, the game gives you the tools to take full advantage of Half-Life 2's physics engine and assets, as well as those of various Source engine games like Counter-Strike, Team Fortress 2, and Left 4 Dead, etc. You can spawn and bind together props to build all sorts of structures and machinations such as buildings, Humongous Mecha, cannons, catapaults, etc. You can set armies of NPCs against each other. And with a library of ragdolls at your disposal, you can even freely manipulate and pose them them to create whatever demented setpiece or puppet show you want.

All of this makes Garry's Mod one of the most popular mediums for creating Machinima, and because the ability to play around with ragdolls lends itself perfectly to all kinds of zany slapstick, it is also widely considered the Denser and Wackier counterpart to Source Filmmaker.

The game uses a lua scripting format for its weapons and events, meaning it's possible to code your own weapons into the game and publish them to the Steam Workshop, along with user-created maps, props, vehicles, entities, NPCs, effects, and models, resulting in a highly customizable game. Currently, it's available on Valve's Steam client for download.

A "sequel" called s&box is currently in development

. According to Facepunch, s&Box is meant to go above and beyond what Garry's Mod was ever capable of, becoming a full game development suite where users can create virtually anything using the entire suite of Source 2 tools as well as the game's own toolset. The game is currently in a "closed early beta" state with only a select few number of people having access.

This sandbox game provides examples of:

"NE BASZ LOVAT A GARAZSBAN" ("DO NOT FUCK HORSES IN THE GARAGE") is Boss' catchphrase and a common running gag in the series.

"NE BASZ LOVAT A GARAZSBAN" ("DO NOT FUCK HORSES IN THE GARAGE") is Boss' catchphrase and a common running gag in the series.