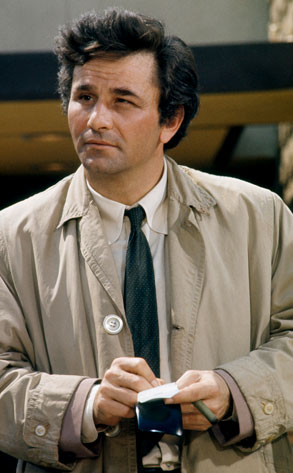 "Oh, uh, just one more thing..."
Leslie Williams: You know, Columbo, you're almost likable in a shabby sort of way. Maybe it's the way you come slouching in here with your shopworn bag of tricks.
Lt. Columbo: Me? Tricks?
Leslie Williams: The humility, the seeming absent-mindedness, the homey anecdotes about the family, the wife, you know?
Lt. Columbo: Really?
Leslie Williams: Yeah, Lieutenant Columbo, fumbling and stumbling along. But it's always the jugular that he's after. And I imagine that, more often than not, he's successful.
— Columbo, "Ransom for a Dead Man" (1971)
Advertisement:

Columbo is a long-running Mystery of the Week series starring Oscar Nominee Peter Falk as Lieutenant Columbo, a blue-collar beat-down Los Angeles homicide detective whose clownish antics, unkempt looks and cheap cigars hide an exceptionally sharp mind. The series is composed of 69 TV-movies, beginning with every third episode of the '70s The NBC Mystery Movie and running through a late '80s/'90s revival.

According to Word Of God — a.k.a. prolific TV production partnership Levinson and Link — the film Les Diaboliques (1955) and its shabby inspector, Alfred Fichet, was the major initial inspiration for the character. Also Porfiry Petrovich, the similarly klutzy Russian inspector from Dostoyevsky's Crime and Punishment, and G. K. Chesterton's humble Father Brown. Lieutenant Columbo (then conceived as Lt. Fisher) first appeared in the short story "May I Come In": the story ends with the detective confronting the killer and uttering the titular words as the story ends. "May I Come In" was then adapted as an episode of the TV anthology series The Chevy Mystery Show entitled "Enough Rope" (with Bert Freed playing Columbo) which in turn became the play Prescription Murder, with the detective character evolving into a more significant supporting character each time. Eventually the play would be adapted into the Columbo pilot.

Columbo is the Trope Codifier and most famous example of the Reverse Whodunnit (better known as the "open mystery"): For as much as the first quarter of each episode, the audience sees the motive set up and then actually watches as each guest villain tries to execute the perfect murder via an intricate — and often high-tech — endgame. Columbo himself then appears in the second act, as the first police presence on the scene... And (with very rare exceptions) the audience is left wondering not "whodunnit" but "howzhegonnagetim" (or, as the show's creators dubbed it, "howcatchum").

Viewers who missed the first fifteen minutes could pick out the murderer pretty quickly anyway; it was usually either Robert Culp, Jack Cassidy or Patrick McGoohan (a close friend of Falk's, who also directed 5 episodes). Barring that, it was the wealthy and/or brilliant character being the most smug about it. Notable one-offs included Richard Kiley, Robert Conrad, Robert Vaughn, Donald Pleasence, Ruth Gordon, Janet Leigh and Leonard Nimoy... Oh, and the first Mystery Movie episode ("Murder by the Book") was penned by then-fledgling screenwriter Steven Bochco and directed by some random wunderkind named Steven Spielberg.

Albeit deliberately structured more like the formal "drawing-room mystery" (think Agatha Christie) than anything like a realistic police procedural, the show was generally an exception to Conviction by Contradiction: While an Encyclopedia Brown-style clue may first trigger Columbo's suspicions, the real chase is his attempts to get enough evidence for an arrest, often by exasperating/panicking the perp themselves into saying or doing something incriminating.

Columbo was the master of Perp Sweating (i.e. shredding the Constitution, albeit totally under the Rule of Cool at all times). Though he generally settles on his horse from the outset, he never lets on, instead worming his way into their confidence via fawning adulation, begging their assistance as he "solves" the case. Usually he forces them to weave a huge web of lies until he can finally Pull the Thread — justified because he's always right. (Interestingly, while the Lieutenant is clearly over-the-top, he's arguably using a more true-to-life interview technique than the angry, confrontational interviews common in straight police dramas; flattery and interest in the other person's concerns are a more effective way of obtaining information— which is also why they have been ruled unconstitutional in Supreme Court case-law due to their also being unreliable.)

A Throw It In accident during the filming of Prescription: Murder led to the show's most signature mannerism: after each interview with the suspect, Columbo begins to leave, the perp begins to relax — and then the Lieutenant returns to ask a significant and leading question, prefaced by a sheepish "Just one more thing, sir..."

Columbo's other trademarks are his weatherbeaten raincoat, a cheap cigar, his broken-down car, his refusal to carry a gun (because of course perps always surrender quietly when the jig is up), and constant references to The Ghost, his never-seen wife, Mrs. Columbo. Later, in an interesting subversion of Executive Meddling, the network tried to force a permanent sidekick on him. He got one: A shiftless, droopy Basset Hound that is most often seen being instructed to stay in the car.

Another mild running gag was Columbo's first name, never revealed (everyone calls him "Lieutenant" instead). An early episode has him showing an ID badge with the name "Frank", a fact only visible with video technology not available when the episode first aired. Word Of God confirmed that this was never intended to be the character's canon name. (In the 1970's, famously, a trivia book author invented the first name "Philip" as a copyright trap. When the answer appeared in the game Trivial Pursuit, he sued for plagiarism. He lost the case, as the defense argued successfully that they had merely been doing research.)

Given all this, Columbo can be easily read as an expression of class struggle within the justice system. The perps are almost always powerful, privileged, and well-educated, while Columbo is, to put it mildly, not. Then again, the series creators have said that they weren't trying to send any message, just felt that Columbo would be more interesting as a fish out of water.

Columbo's prop-laden buffoonishness is usually considered an act, but if so, it is an act he never admits to. Villains routinely accuse Columbo of putting up a false front, which he promptly disavows even more humbly. In Prescription: Murder, a murderous psychologist provides a (seemingly) perfect analysis of the Lieutenant: He believes he can't get by on his looks or charm, so he has turned his disadvantages into advantages. In "The Bye-Bye Sky High I.Q. Murder Case", Columbo remarks that he knows he isn't the smartest guy around and attributes his success to merely working harder, thinking longer, and looking closer than anyone else would.

Columbo has solved every case put before him onscreen (he sometimes claims that he only solves about a third total, but this could well be part of the humility act) and hasn't gotten his man only once — in which case the perp was dying anyway. In true classic mystery fashion, each episode wraps up with the Lieutenant confronting his prey with his train of deduction, culminating in the vital clue; the perp may not confess, but they know, and the viewer knows, they have been beaten. To show the subsequent arrest and trial might be interesting in a lot of cases, but would be entirely superfluous in all of them.

Columbo's last appearance was in the 2003 TV movie Columbo Loves the Nightlife.note The character's final filmed appearance was a short in-character skit

for the ABC 50th Anniversary special, involving Alias in which he visits their facilities (apparently created at the behest of Michael Eisner), although Columbo Loves the Nightlife was the final proper episode. A "finale" TV movie was planned and written, but ABC refused to insure it due to Falk's age and subsequent declining mental health, and Falk died in 2011 with the last script still in limbo.

In England, Dirk Benedict had done the case of Prescription: Murder in a small run of theater, as the title detective.

The entire series has been out on DVD for many years, and a large Blu-Ray box set in a deluxe wooden cigar box type package was released — in Japan. The series is also available on the streaming service Peacock.