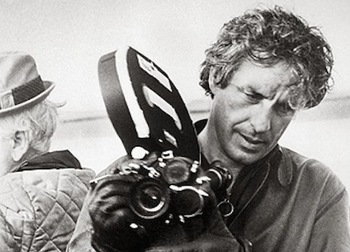 John Nicholas Cassavetes (December 9, 1929 – February 3, 1989) is regarded as the "father of the American Independent Film".

In 1959, he shot a low-budget film about the lives of African American siblings in New York which featured, moreover, an interracial relationship. This film was made outside the Studio System, with little known actors, featured extensive location shooting and a score by jazz genius Charles Mingus. The name of the film was Shadows and it played at film festivals worldwide and was admired by experimental filmmakers and arthouse directors and John Cassavetes, previously seen as a rising theatre and television star, who appeared in some movies, was regarded as a great talent in American cinema. Funnily enough the movie was also liked by the Hollywood studio who asked Cassavetes to make some movies with them, including a Judy Garland vehicle, A Child is Waiting produced by Stanley Kramer of Guess Who's Coming to Dinner fame. The Executive Meddling led Cassavetes to never make a movie in Hollywood studios again. note  A stance that ultimately became a Flip-Flop of God as later films such as Husbands, Minnie and Moskowitz and Gloria were distributed by major Hollywood studios.

He made all his films after that outside the system, many of them funded by his acting fees in several famous Hollywood films like The Dirty Dozen, Rosemary's Baby, The Fury and Don Siegel's The Killers (1964) (which featured future President Ronald Reagan as the villain). He was also The Mentor for several young filmmakers who worked as assistants on his films. Martin Scorsese was a lifelong friend and worked as Assistant Director on Minnie and Moskowitz. And a young Steven Spielberg sneaked onto one of his sets, with Cassavetes noting his already-precocious skills even then.

Cassavetes' films feature a regular Production Posse of Peter Falk, Seymour Cassel, Ben Gazzara, and above all his wife Gena Rowlands. They are renowned for their performances and unique style and also their difficulty in the way that True Art Is Angsty which Cassavetes believed and practiced. Famously, he re-edited Opening Night when previews showed the audience taking it "too well" and made it even harder to sit through in the final version. The great irony is despite how American his subjects and films were, they were better regarded in Europe and Asia more most of his lifetime. After his death, his fame has increased as more and more directors recognized his idiosyncratic style and influence on the medium.