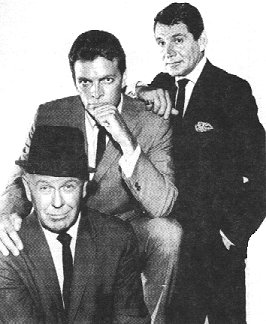 A Lighter and Softer, slightly Campy Detective Drama that ran for three seasons from 1963 to 1965 (sort of; see below) on ABC, Burke's Law followed the adventures of Amos Burke (Gene Barry), a snarky and debonaire LAPD captain who also happened to be a multimillionaire. Accompanied by his sidekicks, the youthful rookie Detective Tim Tilson (Gary Conway) and the world-weary veteran Sergeant Les Hart (Regis Toomey), Burke would ride between crime scenes in a Rolls Royce limo driven by his faithful chauffeur Henry (Leon Lontoc) and investigate lurid murders among the Hollywood glitterati with his trademark wit and style.

Although quite popular in its first two seasons, the show fell victim to Executive Meddling just prior to its third. Network executives at ABC, hoping to cash in on the super-spy craze touched off by by the James Bond films and The Man from U.N.C.L.E., demanded a Genre Shift. Over the heated objections of Barry and producer Aaron Spelling, the show was retitled Amos Burke, Secret Agent, the entire main cast was fired except for Barry, and Burke became a jetsetting spy on the payroll of the federal government. The sweeping changes went over like a lead balloon with audiences and the show was canceled 17 episodes into the season.

In 1994, a Revival (also produced by Spelling) was broadcast on CBS, with Barry reprising his role as Burke, now a widower and the Chief of Police who solved crimes in tandem with his grown son, Detective Peter Burke (Peter Barton). The new series was canceled after two seasons comprising 27 episodes.