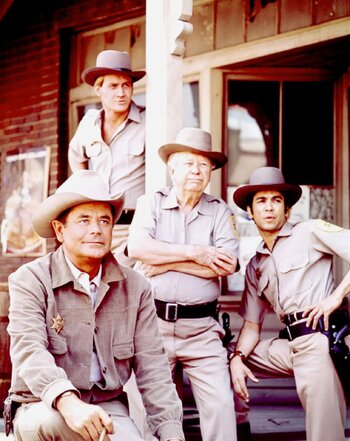 Cade's County is a hybrid crime drama/Western that aired on CBS during the 1971-72 season, produced by David Gerber for 20th Century-Fox Television. It starred Glenn Ford, which made it part of a trend that had movie stars trying their hand at TV series.note Shirley MacLaine had a sitcom entitled Shirley's World in 1970. Midway through the 1970-71 season, both Henry Fonda and James Stewart launched The Smith Family and The Jimmy Stewart Show, respectively. The following season, 1971-72, saw Rock Hudson land a hit with McMillan & Wife, while Anthony Quinn bombed with The Man and the City. And in 1972, Karl Malden scored with The Streets of San Francisco and George Peppard with Banacek, while Richard Widmark starred in a series based on his 1968 film Madigan.

Set in the southwestern desert town of Madrid (no state was ever specified), the series had Sam Cade (Ford), who grew up there, returning to be the Marshal of the area. Having served in Naval Intelligence and in the FBI, Cade was more than up to the lead lawman's job, whether investigating a simple robbery or murder or a missing person case that always seemed to lead to a larger conspiracy. Assisting him was Head Deputy J.J. Jackson (Edgar Buchanan), who may have looked like a doddering old man, but was a very shrewd law enforcer who knew the town (and everyone in it) inside and out. A team of deputies served under J.J., Arlo Pritchard (Taylor Lacher), Rudy Davillo (Victor Campos) and Pete (Peter Ford, Glenn Ford's real-life son). A pair of fetching Indian dispatchers, Sundown (Betty Ann Carr) and Little Bird (Sandra Ego), rounded out the team.

Although it was well-produced and well-received, Cade's County lasted only a season, but when reran the following Summer on CBS, got higher ratings. By that time, Producer David Gerber had moved from 20th Century-Fox Television to Screen Gems (aka Columbia Pictures Television), where he would score his biggest successes with Police Story (1973) and Police Woman. Gerber and Ford would work together again, first on the unsold 1973 pilot Jarrett and later in a two-hour episode of Police Story.

J.J., have the boys go out and round up some of these tropes: