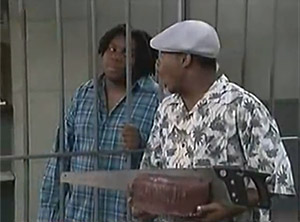 I "saw" you might be hungry.
"So, apparently, there was something in that cake, and he used it to escape. And then I got fired. Pretty lame, huh?"
— Dave Panpa, Henry Stickmin: Stealing the Diamond
Advertisement:

The stereotypical way to smuggle escape tools into a prison is by hiding them in a cake and giving them to the prisoner. Usually, a file

is the item hidden inside, although files can't actually cut through iron bars in real life.

A common parody is for the nature of the cake to be plainly obvious, such as having the file (or something even larger, like a saw) visibly sticking out of the cake which the guards naturally fail to notice. Other variations include: the prisoner digging through a cake he received expecting to find a file inside, only to be disappointed when it turns out to just be a regular cake given in an attempt to cheer them up (by someone who is most likely extremely hurt after watching the prisoner destroy their nice gift right in front of them); as well as the complete opposite scenario, where the prisoner assumes it is a regular cake and eats the whole thing only to be informed afterwards that there was a file inside.

Not to be confused with Jailbait, which may facilitate the need for a Jail Bake if you're not careful.

Compare Pet Gets the Keys, for another way of getting implements of escape to prisoners, and Bedsheet Ladder, another stereotypical part of a Great Escape. For examples out of prison intended to actually hurt unsuspecting people, see Razor Apples.

Henry escapes jail with the use of the file-in-the-cake trick. But the cake that is mailed to him can also contain other objects to varying degrees of helpfulness.

Henry escapes jail with the use of the file-in-the-cake trick. But the cake that is mailed to him can also contain other objects to varying degrees of helpfulness.