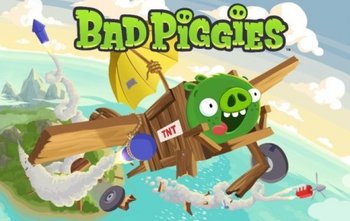 The long-rumoured P.O.V. Sequel & Spin-Off to Angry Birds finally came out in September 2012 for iOS and Android devices (but not some phones since it's too complicated for them).

No, it's not about flinging pigs from slingshots, mind you.* There's plenty of that in Angry Birds Star Wars II and the King Pig mode in the original Angry Birds.

In the Excuse Plotnote for the first episode of the game called "Ground Hog Day", an innocent freckled pig named Ross inadvertently shreds the pigs' map of the location to the birds' eggs, and is sent by King Pig to retrieve all the pieces. This leads to a Puzzle Game in which you have to guide your pig across a screen full of obstacles after building a vehicle appropriate to the screen's specific challenges. Like Angry Birds, there are three stars available for each screen, but while one is always achieved simply by winning, the other two are achievements based on beating the screen with specific challenges:

The first update added a third episode called "Flight in the Night", where Ross actually is carrying a stolen egg across the screen. The second update features the Angry Birds themselvesNote Red, the Blues and Chuck are the only birds appearing in the game, who would fling themselves at you when you wake them up by making too much noises. They eventually become a recurring obstacle in future episodes such as "Tusk Till' Dawn" & "The Road to El Porkado", even when your pig didn't steal their eggs at all.

On April 2014, the game received an Animated Adaptation called Piggy Tales, which focused on the Minion Pigs as they do their trademark antics in their daily lives. In 2016, the game's main protagonist appeared in The Angry Birds Movie, identified as Ross.