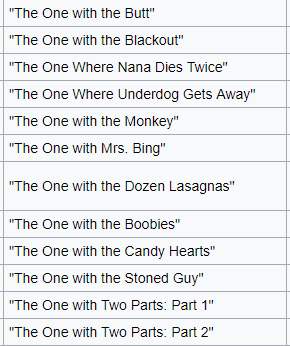 Hey, what's the one with similar episode names?note Two-parters, that's what.
Advertisement:

Many shows utilize quirky episode naming conventions. Though the episode title is usually not even broadcast with the show (usually only Animated Series do this), this information is gleaned from press releases, closed captioning, and guide information. Of course, in literature it can be more obvious.

American Live-Action TV Pilots are often exempt from this, as pilots do not usually have titles, and are usually made before anyone on the production staff comes up with the idea to name episodes idiosyncratically.

Now, if the names get too in-jokey, quirky, or obscure, they can have an adverse effect in being difficult to correlate the plot of the episode when its name means absolutely nothing.

Single-episode exceptions to the rule are the Odd Name Out.

Sub-tropes include Episode Finishes the Title and Excited Title! Two-Part Episode Name! (typically taking the "____! _____!!" title format). Compare Cross-Referenced Titles for when it's only a few episodes that share both a naming pattern and some internal connection, Character Name and the Noun Phrase (if they're used in a series), Unusual Chapter Numbers, Theme Naming, Translation Matchmaking and Title Drop.

Example of:
Once per Episode