All spoilers for The Matrix will be left unmarked. You Have Been Warned! 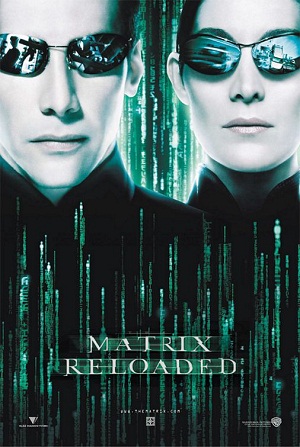 "I have absolutely no idea how you are able to do some of the things you do, but I believe there's a reason for that as well."
"What if I am right? What if the prophecy is true? What if tomorrow the war could be over? Isn't that worth fighting for? Isn't that worth dying for?"
— Morpheus
Advertisement:

The Matrix Reloaded is the sequel to The Matrix and the second film in the cyberpunk franchise of the same name, written and directed by The Wachowskis and released on May 15, 2003.

The war between the machines and the human resistance begins to heat up as Neo (Keanu Reeves) and his allies search for a series of wayward programs that can lead them to the source code of the Matrix and, hopefully, bring the war to an end. As Neo learns the true history of the Matrix, he starts to doubt himself — and the plan to save humanity. The effort to stop the machines grows harder when Agent Smith (Hugo Weaving) returns as an anomaly, working on his own terms (and with new, virus-like abilities).

The film also stars Laurence Fishburne as Morpheus, Carrie-Anne Moss as Trinity, Jada Pinkett Smith as Niobe and Gloria Foster as the Oracle.

Reloaded is a unique installment in that it has far more action than its predecessor (which only really got busy in its third act), more of an epic feel to it (thanks in part to a larger budget and in-depth Worldbuilding), and a more deconstructionist approach according to the Wachowskis.

The Matrix Reloaded contains examples of:

"I have dreamed a dream, and now that dream has gone from me."