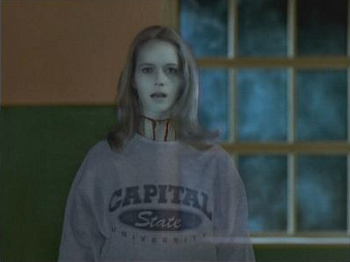 Whether they appear wispy or solid, often a full-bodied, non-Bedsheet apparition is depicted in values of only one color, often white/grey or blue. If there is an exception, however, it will be for the eyes.
Advertisement:

This refers to a disembodied apparition of some kind that appears in a full-color work and is monochrome for the purpose of showing that it isn't a physical presence. They somehow glow any color of vapor such as ghostly white or blue.