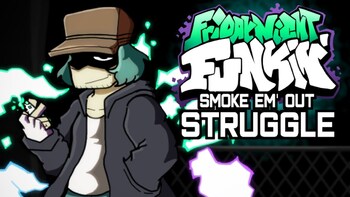 is a Friday Night Funkin' Game Mod by atsuover

note (Who also made the Vs. Annie mod) and Rageminer

note (Co-creator and provided the voice of Garcello). It features Boyfriend and Girlfriend encountering a strange man named Garcello in a back alley, who tries to peer pressure Boyfriend into smoking a glowing, color-changing cigarette. However, as they have a friendly little rap battle, it becomes clear that Garcello is not as bad as he seems. But when he feels a pain in his chest...how will things finish?

Shortly after its release, the mod became a huge Sleeper Hit among the community, quickly becoming one of the most popular and viewed/played mods within a week! Nearly surpassing the Vs Whitty mod, the most popular mod, thanks to the combination of awesome music, unique storytelling, sympathetic characters, and a very strong and important anti-smoking message to players. This can even be considered an impromptu anti-smoking PSA in the form of a rhythm game and an unofficial Very Special Episode of Friday Night Funkin', much like how many franchises in The '80s and The '90s featured anti-smoking PSAs as Very Special Episodes.

An expansion for this mod has been announced and is currently being developed, titled "Smoke 'Em Out Struggle +", which will feature additional mechanics and songs, and an additional week that's meant to serve as what Garcello would look like if he stopped smoking or never did in the first place.

Warning! This mod became so massively popular following its release, most especially the plot twists in it being massively adored by fans, that Garcello has become a major Walking Spoiler for his own mod. As such, this page will be made Spoilers Off. If you want to experience the twists unspoiled, play the mod or watch a playthrough before checking out this page.

"I-I'm not giving up just yet though. You've got some tight tropes, little man."