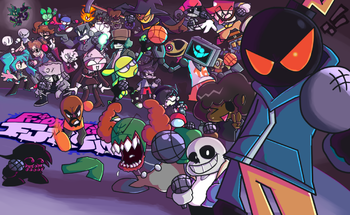 And these are only the popular ones!
Art made by EllisBros

This is an index of fan works related to Friday Night Funkin'.

Full Game Overhaul
Mods that revamp the entire vanilla game and assets with new music and stay within the same universe and continuity as the original game. These will usually be called "Friday Night Funkin': (with a subtitle)". In essence, these are mods that "remix" the vanilla game.
Original Full-Ass Games
Mods that feature entirely new original characters across multiple weeks not from the vanilla game's universe. Generally full games that remove all the default weeks and revamp the entire UI and game engine.
Original New Weeks
Original mods that generally focus on one opponent and week only and sometimes may feature another character or two.
Advertisement:
Crossovers
Mods that crossover with existing IP's and pre-existing media.
Discontinued/Deleted Mods
Mods that have unfortunately been deleted from their original source and/or have been officially abandoned by their creators and left incomplete during development.