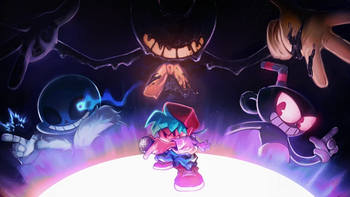 Indie Cross is a Game Mod for Friday Night Funkin' that, as the title suggests, is a Crossover of several Indie Games in one mod, including characters from Cuphead, Undertale and Bendy and the Ink Machine. You can download the mod here

Boyfriend finds himself warping across multiple different indie game worlds, subsequently facing off against various opponents in a rap battle.

The demo for the mod was made available on November 2nd, 2021, with it being fully released on April 8th, 2022. Directed by BrightFyre and DA Games, and founded by MORØ_Nighteye, the latter initially serving as director but has since moved on after conflict with the dev team over disagreements with the hiring of more coders.