Running With Scissors insists that the actions depicted should not be reenacted in Real Life.
"I Regret Nothing."
— The Postal Dude

Before Uwe Boll brought us 2007's magnificent masterpiece of a film, Postal, there was the Postal video game series, developed by Running With Scissors, which started with 1997's Postal. Arguably one of the most unsettling PC games ever created, and one that attracted a good dose of attention from the Moral Guardians, it puts you in the shoes of "The Postal Dude", who believes himself the Only Sane Man in a world gone mad (he's not). As such, he goes on a bloody rampage, shooting it out with cops, soldiers, and innocent bystanders alike. While it has attained some Cult Classic status in recent years, it's generally considered to not have aged that well.

That all changed with the 2003 sequel Postal 2, which doesn't take itself nearly as seriously. The Postal Dude — now considerably less Ax-Crazy — is married and lives in a trailer park, and the game covers what has to be the weirdest week of his life, as every day the simplest errands become life-or-death battles. Cashing his paycheck? Bank robbers storm the building and he gets caught in the crossfire. Returning a library book? Book burners set the library on fire with him in it. It was followed by an expansion pack, Apocalypse Weekend, which covers Saturday and Sunday of The Postal Dude's weirdest week, with new weapons and characters.

Postal 2 was re-released on Steam in 2012 through the "Greenlight" service, and then received updates in late 2013 and early 2014 with a ton of new content, including popular Game Mod A Week In Paradise, which merges the two campaigns and backports Apocalypse Weekend's enhancements, along with improvements to video settings and support for Steam Cloud and Steam Workshop. After about 12 years, the game now has yet another expansion pack, Paradise Lost, the trailer of which you can find here.

Originally slated for a Fall 2014 release, it was delayed, then finally released on April 17, 2015. The events of the expansion pack occur 11 years after the events of the original game and Apocalypse Weekend, and involve The Dude returning to Paradise, which has been turned into a post-nuclear, dystopian hellhole after it was nuked at the end of Apocalypse Weekend, to search for his dog Champ. What follows is five hellish days that are even worse than his original week in Paradise.

Postal III, which is built on the Source engine, was co-developed by Running With Scissors, TrashMasters Studios, and Russian developer/publisher Akella. It was announced in 2006, and was released worldwide via digital distribution on the Steam store Christmas week on December 20, 2011, although three retail versions were released in Russia a month before on November 23, 2011. It was supposed to be released on PC, Mac OS X, and Linux, with Xbox 360 and PlayStation 3 ports announced for 2012; however, only the PC version was released. The game was released unrated due to Akella not wanting to pay for an ESRB rating, meaning that the game was (at one point) only available in non-Russian territories through the Running With Scissors website; it is now only available on the Steam store, although still unrated. Due to a combination of lackluster sales, some serious miscommunication between RWS and Akella, and the sheer number of problems with the game, RWS has dropped the title from their store and refers to the title as "Russian Postal", officially declaring it a spin-off game.

The loose 2007 film adaptation by Uwe Boll bases most of its inspiration on the second installment in the series, mostly featuring just allusions to the work. As with most of Uwe Boll's work, the film falls into the same issues that most video game movie adaptations fall under. Compared to Uwe Boll's other video game based films, however, this one gets the least of the flak, even going so far as getting a positive review from G4 of all people. A sequel was announced but was quickly canceled.

On 20 May 2016, RWS released POSTAL Redux, an HD remake of the original Postal, on Steam, and later open sourced

the original version of Postal 1. Four years later, it was ported to the Nintendo Switch on October 16th, making it the first time the Postal series has appeared on a console.

On October 14th, 2019, RWS made a suprise announcement: Postal 4: No Regerts, a brand new game in the same open-world vein as Postal 2, released in Early Access that day. Postal 4 sees the Dude (now voiced by Jon St. John, AKA Duke Nukem) and Champ lose their car, and are forced to make ends meet in the quaint city of Edensin, Arizona. RWS released the game on Steam's Early Access platform to avoid making the same mistakes that befell Postal III during its development.

Another spin-off known as Postal: Brain Damage was announced for PC on 5 September 2020 at Realms Deep, and is slated for a late 2021 release. It's a Retreaux shooter that harkens back to the violent first person shooters of The '90s, such as Doom and Wolfenstein 3D. Watch the announcement trailer here

The series is not only controversial but has been panned by critics - mostly reviewers who were offended by the content, such as Robert Coffey of Computer Gaming World who wrote that "until someone boxes up syphilis and tries to sell it at retail, Postal 2 is the worst product ever foisted upon consumers," a quote that has since been included on the boxes of re-releases. The series (mostly the second game) has developed a cult following reputation with its mixture of shock value and genuinely fun, cathartic gameplay, with the second game alone continuing to be a popular source of updates and modding to this day. A mobile game spin-off starring "the Postal Babes", appropriately called Postal Babes, was released in 2009.

Not to be confused with Portal, although a 2016 update for the second game, which promises of a store which will open in 2016 (in-universe), pokes fun of it in the newly opened "STEME Store". See also Hatred, the Spiritual Licensee of these games. 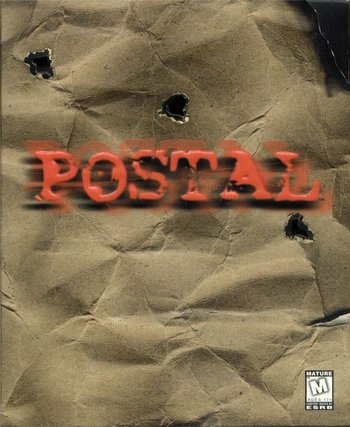 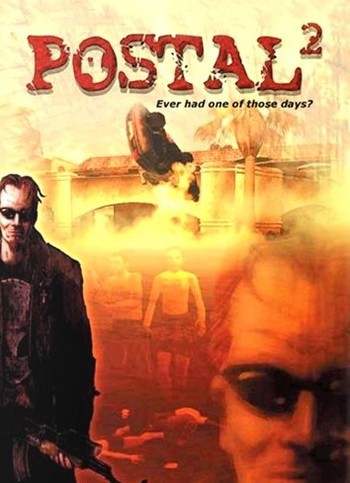 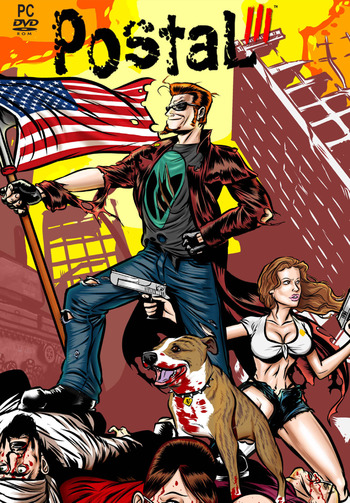 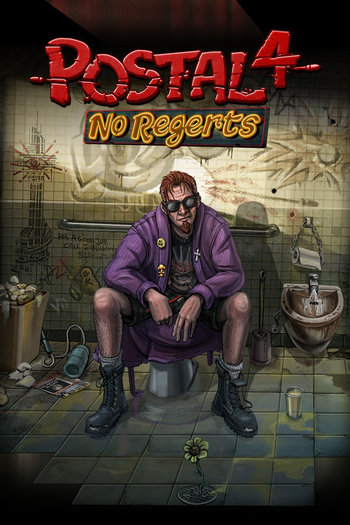 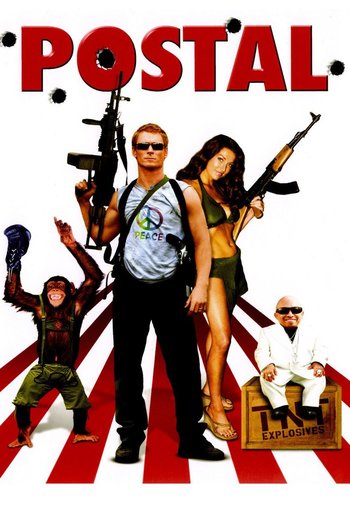 Interviewer: Last question. What is the difference between a duck?
Postal Guy: ...and? [Beat] What the hell is wrong with you people?! A duck?! I came here for a job!
Feedback

Parodied in the Postal film adaptation: the interview process for one Incompetence, Inc. involves ever more surreal and nonsensical questions, asked by a hostile stenographer who doesn't even bother to wait for answers, until the Postal Guy snaps entirely. His outburst gets him to the top of the list.

Parodied in the Postal film adaptation: the interview process for one Incompetence, Inc. involves ever more surreal and nonsensical questions, asked by a hostile stenographer who doesn't even bother to wait for answers, until the Postal Guy snaps entirely. His outburst gets him to the top of the list.