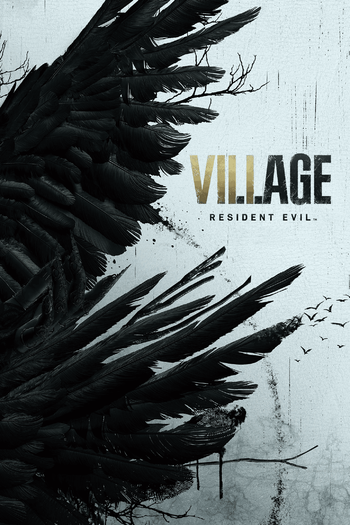 "Let's see what you're really made of, Ethan Winters."
"Long ago, a little girl went with her mother to pick berries for her father who was hard at work. But the forest greeted them with a dark cold silence, the bushes empty. Yet too determined to find berries, the rascal broke free from Mother's grasp and vanished into the trees. Mother's worried cries faded fast as the girl ran on; over vine, and under branch and into the forest deep."
— Mia Winters
Advertisement:

Resident Evil Village (Biohazard Village in Japan),note Stylized as VII.I.AGE RESIDENT EVIL and VII.I.AGE BIOHAZARD respectively also known as Resident Evil 8 and Resident Evil 8: Village, is a First Person Survival Horror game and the twelfth mainline entry in the Resident Evil series, released on May 7, 2021 for the PlayStation 4, PlayStation 5, Xbox One, Xbox Series X/S, PC via Steam and Google Stadia.

Set four years after the events of Resident Evil 7: Biohazard, Ethan Winters is living happily with his wife Mia in Eastern Europe after surviving the events in Dulvey, Louisiana and has a daughter, Rosemary. One night however, BSAA operative Chris Redfield assaults his home, kills Mia, and takes away Rose. Ethan gets knocked out and taken away, but wakes up in the middle of rural Europe, next to his crashed transport and a mysterious village. Now Ethan has to track down the whereabouts of Rose, uncover the truths behind the village, and confront new foes that crawled out of the old world.

During the Showcase preview, it was announced that purchasers of Village would get a free copy of the multiplayer third-person game, Resident Evil ReVerse.

Similar to Resident Evil 7's "Kitchen" demo, a playable demo titled "Maiden" was released January 21, 2021 for the Playstation 5, in which you play as a prisoner of Castle Dimitrescu who tries to escape. It, more or less, is just meant to show off the improved RE Engine and preview the castle setting. The month of April saw some more demos, this time limited to 30 minutes each like Resident Evil 2 (Remake)’s "1-Shot" demo, released to the lead up to the game. The first centering around the starting village portion, the second focusing on the castle and the final demo being both areas combined and able to be played for 60 minutes.

In June 2021, Capcom announced, due to the game's massive success and demand, that additional DLC was in development.