Can't Move While Being Watched 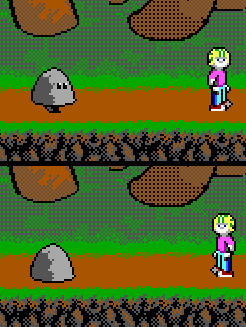 I swear that rock was farther away.
"Don't blink. Don't even blink. Blink and you're dead. They're fast. Faster than you could believe. Don't turn your back, don't look away, and don't blink. Good luck."
— The Tenth Doctor on the Weeping Angels, Doctor Who, "Blink"

A stock enemy that freezes and/or stops attacking when looked at, but will attack when line of sight is broken. It is fairly common in the Horror Genre, as it is a good source for Paranoia Fuel, especially when said mook tries to blend into the scenery. Also very common in Video Games, though it's much less likely to be played for horror if (as pictured above) the thing moves whenever the player character looks away, even if the player can still see them from beyond the fourth wall.

Can overlap with Murderous Mannequin or a Living Statue. See Also: Offscreen Reality Warp, Creepy Changing Painting, Don't Look at Me!. But whatever you do, DON'T. BLINK.