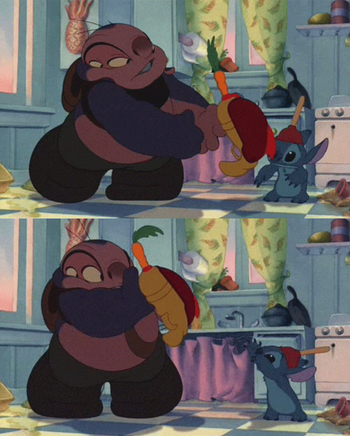 Hot Potato is a children's game in which kids toss a beanbag around as fast as possible while music plays, trying not to be the one holding the bag when the music stops.

This happens a lot in fiction, where characters end up passing something they definitely don't want to be holding among themselves, sometimes even shoving it into each other's hands. This can be a baby with a dirty diaper (handled gently, of course), something sticky or gross, or any kind of unpleasantness. Can also occur with something intangible, like a responsibility, a leadership role, taking point on a patrol, or volunteering for a duty. In extreme cases, this may be a Refusal of the Call. Surprisingly often, the hot potato is a bomb, which is its own subtrope.

Occasionally, the situation is reversed, in which all parties actually want the object in question, and constantly attack each other to grab it, or at least knock it out of the others' hands. For example, the bridal bouquet at a wedding, or a golden apple.

Compare Keep Away (where characters pass the thing around because they don't want someone else to get it) and Clingy Macguffin (where the thing works more like a boomerang).

Not to be confused with the Game Show Hot Potato, or the song by The Wiggles.