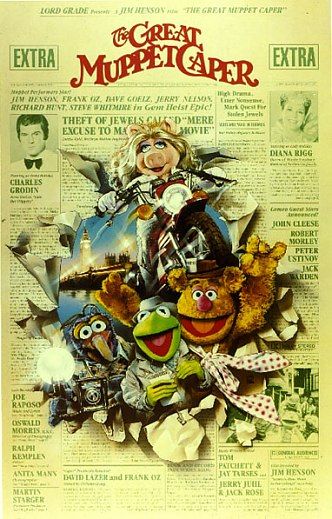 Miss Piggy: Um, why are you telling me all this?
Lady Holiday: It's plot exposition. It has to go somewhere.
Advertisement:

A 1981 release by Jim Henson and his studio, The Great Muppet Caper was a sequel to The Muppet Movie and would prove to be the second in a long line of live-action Muppet movies.

The story goes that Kermit and Fozzie are identical twin newspaper reporters (their editor doesn't get it, either) and Gonzo's their photographer. After nearly losing their jobs for missing a massive jewelry robbery scoop right under their noses, the intrepid trio head to London to get the follow-up story to said scoop as an exclusive to save said jobs. The robbery victim is Lady Holiday, who just happens to have wound up with Miss Piggy in her employ. Pig meets frog, frog thinks pig is Lady Holiday, pig goes along with it because she's smitten with frog, and all the while the thieves are closer than Lady Holiday thinks.

This very silly movie has so many Lampshade Hangings they could open a store to sell them and have enough stock to last a week. Also very apparent are the highly-increased production values compared to its predecessor and the film debuts of some Muppets who showed up on The Muppet Show after the first movie. The movie also stars Charles Grodin in a role that strikes the right balance between serious villain and scenery chewing.

Followed by The Muppets Take Manhattan.

The Great Muppet Caper includes examples of the following:

—Wait a minute, hold it right there, don't go home yet! Say "Tropes"! [The screen blacks out]
I'll send you each a copy!

"Your voice was Dubbed!"

Before being dragged to prison, after Nick frames her for stealing Lady Holiday's jewels, Miss Piggy takes the opportunity to break the fourth wall, declaring that he can't sing and that his voice was dubbed.

"Your voice was Dubbed!"

Before being dragged to prison, after Nick frames her for stealing Lady Holiday's jewels, Miss Piggy takes the opportunity to break the fourth wall, declaring that he can't sing and that his voice was dubbed.