Spoilers for Incredibles 2 will be tagged as usual. However, due to its nature as a sequel, this page contains unmarked spoilers for The Incredibles. You Have Been Warned! 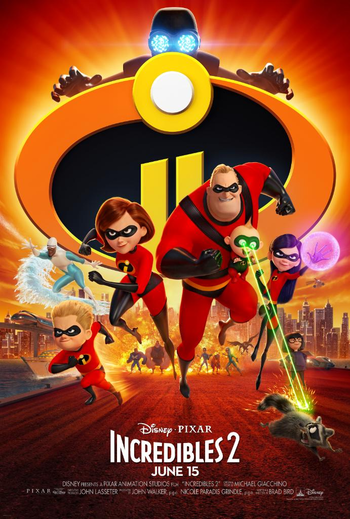 Incredibles 2 is Pixar's twentieth animated film, released on June 15, 2018 and the sequel to the 2004 film The Incredibles. Brad Bird returns as writer and director, as does most of the original voice acting cast.

Everyone's favorite family of superheroes is back — but this time Helen (Holly Hunter) is in the spotlight, leaving Bob (Craig T. Nelson) at home with Violet (Sarah Vowell), Dash (Huck Milner), and Jack-Jack to navigate the day-to-day heroics of "normal" life.

It's a tough transition for everyone, made tougher by the fact that the Super Relocation Act is still in force. However, an eccentric billionaire has a plan to turn public opinion to favor the supers, and the family grows aware of baby Jack-Jack's emerging superpowers.

When a new villain by the name of Screenslaver hatches a brilliant and dangerous plot, the family and Frozone (Samuel L. Jackson) must find a way to work together again — which is easier said than done, even when they're all Incredible.

Incredibles 2 played in theaters along with the Pixar short Bao.

Screenslaver's hypnotic screens make use of patterned strobe effects that could trigger seizures in epileptic viewers, leading Disney to issue a warning at the start of the movie and sending disclaimer posters to theaters to display at their box offices. The strobe effect on the screens was removed entirely for every instance of the movie after its theatrical run, including home video, streaming, and TV airings, though the effect can be slightly and briefly seen off characters' faces when the source is off screen.

open/close all folders
Tropes # to D
Tropes E to H
Tropes I to L
Tropes M to P
Tropes Q to T
Tropes U to Z
"I've got to succeed! So she can succeed! So we... can succeed!"
Feedback

Is She Having Adolescence?

Violet tries to destroy her super suit, but fails miserably.

Example of:
Failed Attempt at Drama

Is She Having Adolescence?

Violet tries to destroy her super suit, but fails miserably.