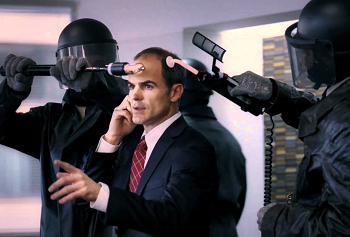 "Searching for a handle on the moment? I can't help you. The only comfort I can offer... is my promise that tomorrow morning you won't remember a thing."
— Agent K, Men in Black
Advertisement:

When something dramatically outside of normality happens, and the Muggles are able to see past the Masquerade, a team (or at the least, a special go-to guy) is often dispatched to erase and/or alter the memories of any witnesses to cover up the abnormality of their mundane lives and keep the existence of the weird stuff a secret (often by using some sort of Laser-Guided Amnesia).

Note: This is not about the amnesia, or about what causes it. It's about WHO causes it. (No, not that WHO, either. Or is it...)